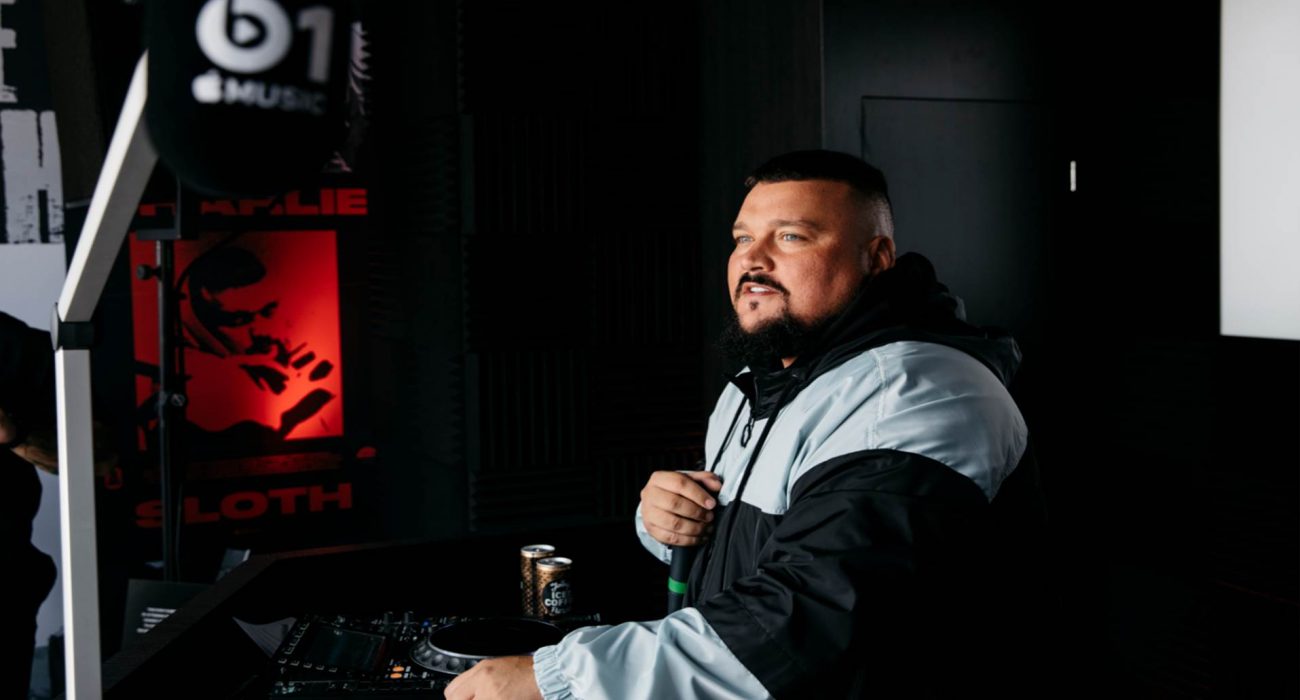 Written by Anja Samy on 23rd September 2019. Posted in Interviews

Head of Publicity, Phedra Broch, sat down with DJ, producer, TV presenter and all round big personality Charlie Sloth – before his appearance at the University of Manchester Freshers’ Fair – to talk about his inspirations, his longstanding rap show – Fire in the Booth,  meeting Drake,  and joining Beats 1.

“Was Tim Westwood one of your inspirations for Fire in the Booth?”

He was definitely someone, who I looked up to a lot coming up on my journey. He had the biggest show over here in the UK and was someone who opened a lot of doors for the artists here. So, him (Tim Westwood), Funk Flex and Trevor Nelson were some of the DJs that I really looked up to.

“What was your reason for switching from rapping to DJing and presenting?”

My entrance to music was as a DJ; when I was a kid, I would DJ at youth clubs. At the age of 13, I was doing pirate radio, by the time I was 14, I had a residency at Dingles in Camden and then I got into production and rapping. I just love music so I wanted to be involved to whatever capacity that I could in this music business.

“Fire in the Booth has opened its doors to a variety of MCs but what was it like meeting Drake?!”

He’s a good guy. He is just a normal person and he is probably one of the humblest artists that I have had the pleasure of meeting. A lot of people like to throw shade his way because of how he engages with the British culture but I just think, that he’s a fan in the same way that most of us are, of music. He just wants to be a part of what we’re doing over here and celebrate it in the same way that we do. The culture in Toronto runs parallel with ours in London and the UK; we have the same slang and we dress the same, so we go hand in hand with each other but yeah, [Drake] is a nice guy!

“Drake is amazing; he brought back Top Boy!”

It’s sick! I watched it all. We were lucky enough to watch the first four episodes in advance so I only had six to go. That’s a lot for me but I had to binge-watch the lot. I just couldn’t stop watching it.

“How was your transition from BBC Radio 1Xtra to Beats 1?”

The transition was very smooth because Fire in the Booth has always had that online audience so it still went to the same place that it was going to anyway, which is my YouTube channel. The show is now on an international platform, where people all around the world are listening, so it’s really interesting to see how people react and engage with the show from America, Asia or Canada. It’s crazy but incredible.

“What do you think about the current state of the UK music scene?”

It’s incredible and it hasn’t been as healthy as it is. I think the fact that we’ve got artists from all over the UK popping off is great because it was very London-centric for a long time and now it feels like the UK really is the UK. Manchester, at the minute, is on fire. There are so many great artists coming out of Manchester but I think every city in the UK has finally got its own voice which makes it really exciting because, even though we’re all British, we all have our cultures so it’s good to engage with them all.

“Are you linking up with Aitch any time soon?”

“Talk to me about Fire in the Park.”

It’s coming up this month and it’s actually going to be crazy. It’s my first festival. [Fire in the Park] is something that my team really sat down about because there’s no real festival in the UK, that celebrates just UK culture, do you know what I mean? So, we wanted to put something together that celebrates just UK artists, where Americans don’t come over and take the headline spots. We’ve got a couple American artists there but they aren’t taking the headline spots which was very important to us.

Interviewing Charlie Sloth as a student radio presenter was an amazing opportunity. It was inspirational to know that he entered the scene as a young boy and built himself up from there to becoming one of the best DJs/presenters that the UK has birthed. Bringing his Apple Music Tour to the University of Manchester was, for many students, an eye-opener and encouragement to simply invest in their passion.

For now, we wish Charlie Sloth all the best for his first ever festival, Fire in the Park 2019, taking place at The Ponderosa, Sheffield, United Kingdom, 28 September 2019.

Students can currently sign up for a 6-month free trial on Apple Music (T&Cs apply). Listen to the Charlie Sloth Rap Show on Apple Music’s Beats 1 every Saturday at 8pm and on demand.