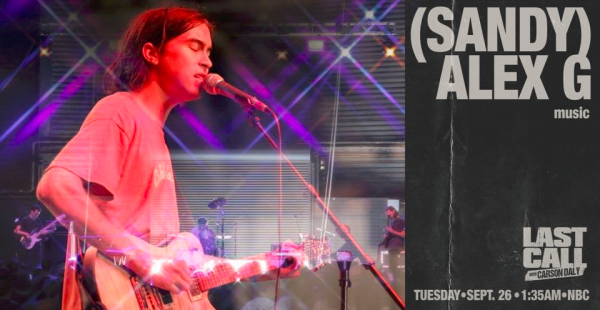 Having built up a cult following through Bandcamp with his lo-fi indie rock sound,
Philadelphia musician (Sandy) Alex G was signed by Domino in 2015, though his performance at the Deaf Institute was still very much embedded in DIY principles.

Alex and his band appeared a couple of minutes before their scheduled start time, tweaked
their instruments and, without warning, blistered through the first hour of the set, with
little/no gaps between songs.

The first hour mostly consisted of tracks from his 2016 album Rocket, including the alt-country
Pavement-esque ‘Proud’ and the jazzy ‘Guilty’ as well as heavier distorted numbers
like ‘Brick’. Alex either swaggered about the stage guitar in-hand, or was hunched over a
Casio keyboard with his voice varying from a soulful crooning to a gritted teeth snarl. With
only four on stage, the band did an admirable job of performing the tracks on the album,
which contains the most complex and varied songwriting in Alex’s back-catalogue.
At the hour mark, Alex finally chatted to the crowd, and then took requests for the final
section. At a more relaxed pace he played fan-favourites like ‘Sarah’, ‘Mis’ and ‘Mary’ from
his early self-released albums, which drew big reactions from the crowd. He even slipped in
a surprise cover of Blink 182’s ‘What’s my age again’.

The gig was refreshingly un-showy, and focused on playing as many tracks as possible for the
eager crowd. We may have also witnessed a first: a genuine encore. At the end Alex went
straight to the merch table, taking pictures and chatting with the fans he knows launched
his career in the beginning.