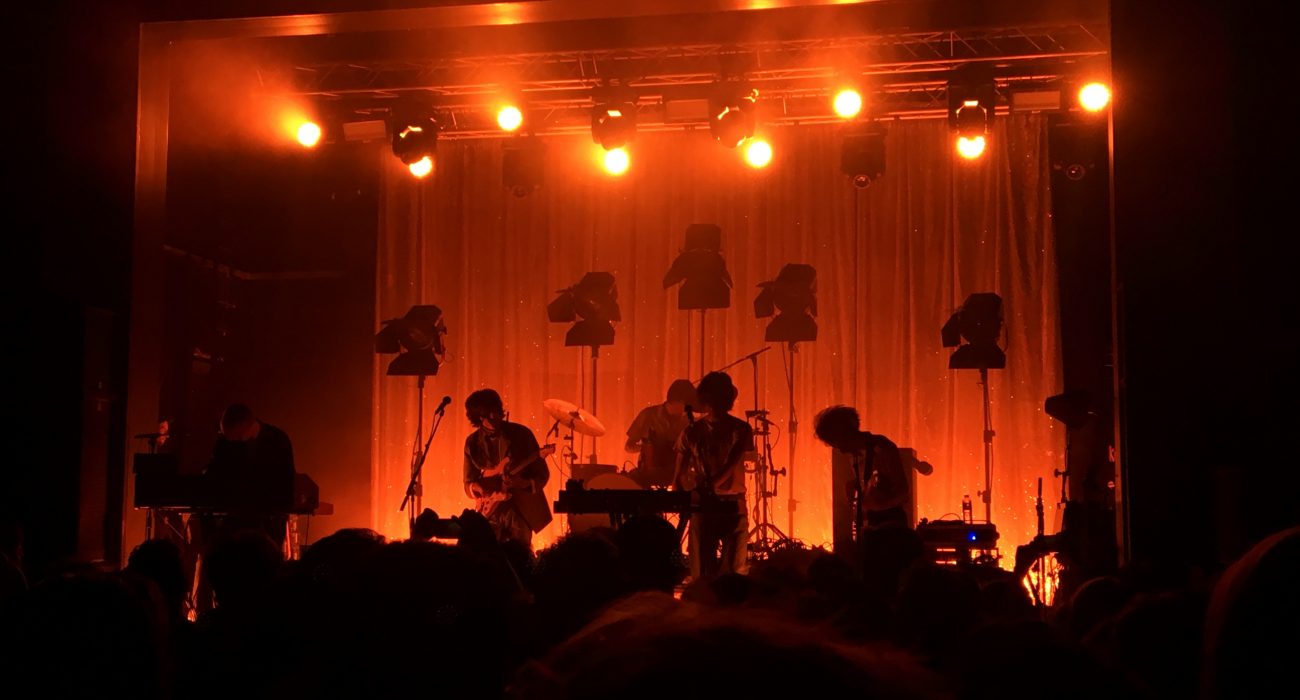 Written by Mia Edwards on 6th November 2018. Posted in Reviews

Darkness. The smell of BO and beer. The nondescript chatter and buzz of pre-show hype. Out from the dark, synth chords start pounding away as a slick guitar riff begins to ring out; the crowd instantly starts bopping away. Parcels have arrived. Straight off the back of their self-titled debut album, the Berlin based Aussie boys have been lighting up the European synth-pop circuit for years and after 2017’s collaboration with Daft Punk, they have been on everyone’s lips. I sat down with the band before they headlined Academy 2 to talk all things music, influences, and Christmas albums. When asked which genre Parcels would describe themselves as, Patrick (keyboardist and vocalist) said ‘I don’t think it’s important, and it’s not very easy to define. I wanna say pop music because that’s the mentality, kind of, but I don’t think people would instantly associate our sound with pop music,’ and as opener Comedown’s disco synths and jazz-like guitar solo suggests, Parcels are musically miles away from the formulaic music dominating most charts today. However, the intense audience reaction, plus their 1.8 million monthly Spotify listeners, shows this 5-piece has a great understanding of what clicks with a listener. As drummer Anatole puts it ‘in Berlin we were pretty influenced by music that was made to make people dance and we try to re-enact that in our lives shows cos there’s something really special about the whole audience dancing to your songs,’ and when smash single Tieduprightnow is finally delivered there isn’t a single member of the audience who can’t help but groove to this masterfully crafted funk hit.

That’s not to say the boys are all about fan service, as they admits that sometimes ‘we decide to mess with the audience, like after a heavy dance song we’ll play a really slow song’ which at points in the set can be frustrating, especially when the crowd desperately wants to just dance and sing along. These creative decisions might be a product of the youthful playfulness and self-deprecating nature of these lads, which is quite refreshing in a climate where bands take themselves and their reputation too seriously. Anatole even jokingly mocks Patrick when he tries to talk me through the pedals and effects they use to achieve their unique synth sound: ‘Oh the way we make sounds, hm it’s very interesting’ jokes Anatole in a faux intellectual voice. The joviality continues when discussing their Daft Punk collaboration: ‘they [Daft Punk] have inside helmets and outside helmets, the ones they wear on their album covers are the heavy duty ones, but in the studio they just wear smaller ones with better breathing space and holes in the side to listen, it’s pretty casual.’ When asked about future projects, keyboardist Patrick jokes about the possibility of a Christmas album, much to the instant disdain of his bandmates, although I for one would love a funk cover of All I want for Christmas Is You, and even John Lennon delved into the festive realm at one point. 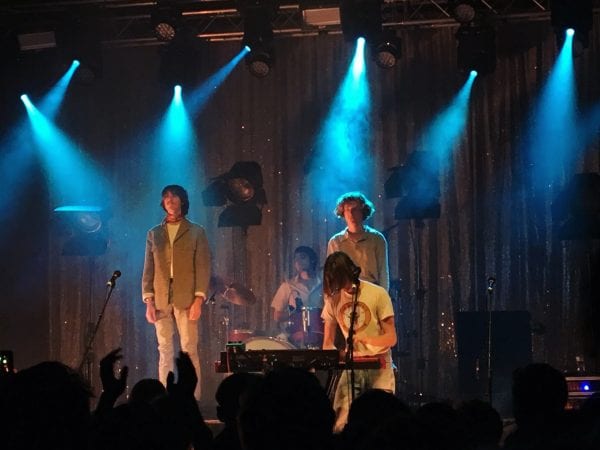 That’s part of the quirky charm of Parcels, when the 8 minute long Everyroad is performed, which
Patrick called ‘liberating, as we weren’t trying to make a pop song, we just made it for ourselves
through jamming,’ guitarist Jules and bassist Noah climb up the stage and begin performing a David Byrne-esque minimalist dance. The crowd goes wild for it and you can see from their beaming smiles after their little choreographed moment they relish these moments of absurdity, although this referential moment is superseded by my highlight of the whole show, when Parcels’ display themselves as the collective they truly are. The five bandmates leave their various positions on the stage to form a single line at the front of the stage for the chilled Bemyself, showing the band off as a cohesive, creative unit in contrast to other bands that portray themselves as merely the FRONTMAN and co. If guitarist Jules wasn’t already the spitting image of George Harrison I would’ve forgiven you for not noticing the comparison earlier, but as they stated in our earlier interview ‘when song writing we would always sit down altogether and listen to demos to decide things together, from the instrumental side to lyrics. We never really wanted a main vocalist either; we wanted it to be like The Beatles.’ The impassioned sing-alongs, the creative harmony, the eccentric bandmates, and most importantly the fantastic songs; Parcels are on the Abbey Road to something special.

They leave us on IknowhowIfeel, a surprisingly slow track in contrast to their bigger dance hits but it makes perfect sense when Parcels deliver their last trick of the night. One by one, throughout the song, each band member leaves the stage, starting with the guitarist, and ending on the drummer. By leaving those responsible for the beat to continue by themselves, it installs the catchy tune into the minds of the audience members much like a fade out on a record, so that when the drummer finally leaves the now empty stage, the audience carries on singing the tune without them even there. Genius.