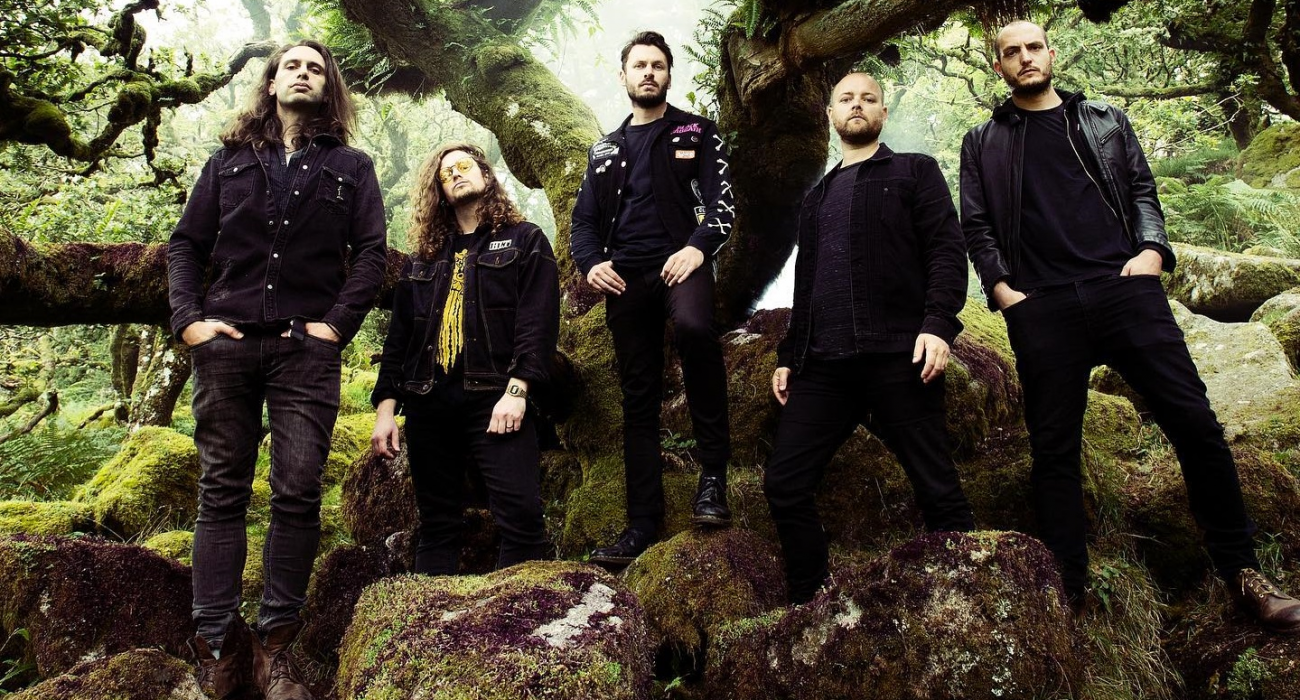 Written by webeditor on 24th May 2020. Posted in Interviews, Music, Reviews

London’s occult psychedelic rockers “Green Lung” mix timeless early metal sounds with rural British folk horror to create something heavy and beautiful. I met the 5 musicians combining haunting melodic doom metal with pagan and occult imagery over a pint to talk about their sound and philosophy.

Formed only three years ago, the band have already made a name for themselves and seen their sound evolve from more classic sludge to something less noisy and more crafted. They have been including more and more clear melodic and harmonic elements, separating them from the majority of current doom bands which prefer abusing guitar and vocal effects. Citing both Queen and Black Sabbath as some of their most important musical influences collectively, their emphasis on melodic grandeur and gloomy face-melting riffs make perfect sense. Guitarist Scott Black supplies soaring harmonies and menacing doomy riffs that feature heavily in the mix. These are held up by rock-solid crunchy basslines from Andrew Cave, the palpable gloomy atmosphere from the organs by John Wright and drumming from Matt Wiseman that will make anybody rock their head. Though the doom sound is clearly there, the band said that bands from other flavours of metal such as Iron Maiden and Judas Priest as well as bands from other genres such as the Beatles and Bad Brains have been instrumental in getting them to where they are. As Black characterises their style, they play “fruity doom”. Indeed, it takes no effort for me to imagine biting the apple of Eden while Green Lung is playing.

On top of this go the powerful, operatic glissandos of vocalist Tom Templar that spit ‘occult venom’ into the mix, bringing the experience to life. The thematic content of the lyrics is inescapably dark and steeped in pagan mystery. Aesthetically, there is nothing else quite like this. Consciously avoiding the overused genre tropes of science fiction intrigue and arid desert wastelands, the lyrics follow the British traditions of folk horror and heavy psychedelic music both popular in the 70s. Having all grown up in the English countryside, stories of witches in the woods are much more familiar than sandstorms in the desert. They are the musical vanguard of the folk horror revival that has been taking place in recent years. However, this is not just an aesthetic to facilitate writing lyrics. To Green Lung, it is a medium through which to reflect and comment on things outside of its immediate scope.

Even more so moving forward, Templar says he is going to use the motifs of folk horror as metaphors for today’s Britain. When asked about the new album they have started working on, he said the songs are going to be “naturally a bit more political” than before. The album, which he revealed will be of similar length to their 2019 debut “Woodland Rites”, should be with us in about a year. They intend it to be a commentary on issues such as the climate crisis and the political scapegoating of immigrants in the form of heavy melodies and occult shadowy allegories. Musically, we can expect it to be a natural progression from Woodland Rites. They were excited about their next project because having firmly established themselves, they are more confident and have more resources to work with on the album. It will show them include even more top-end melody and harmony as well as including keys in the songwriting from the start which they said, regrettably, were only added late in the production of “Woodland Rites”.

Green Lung deliver atmosphere thicker than the morning fog of winter. The composition and arrangement show keen attention to detail, resulting in songs that have layers, flow, direction and cauldron loads of pay off. They are innovative doom without being either heavy-handed nor cliche. If you want stories of witches and dark rituals epically sung to you with immersive monolithic instrumentation then look no further…