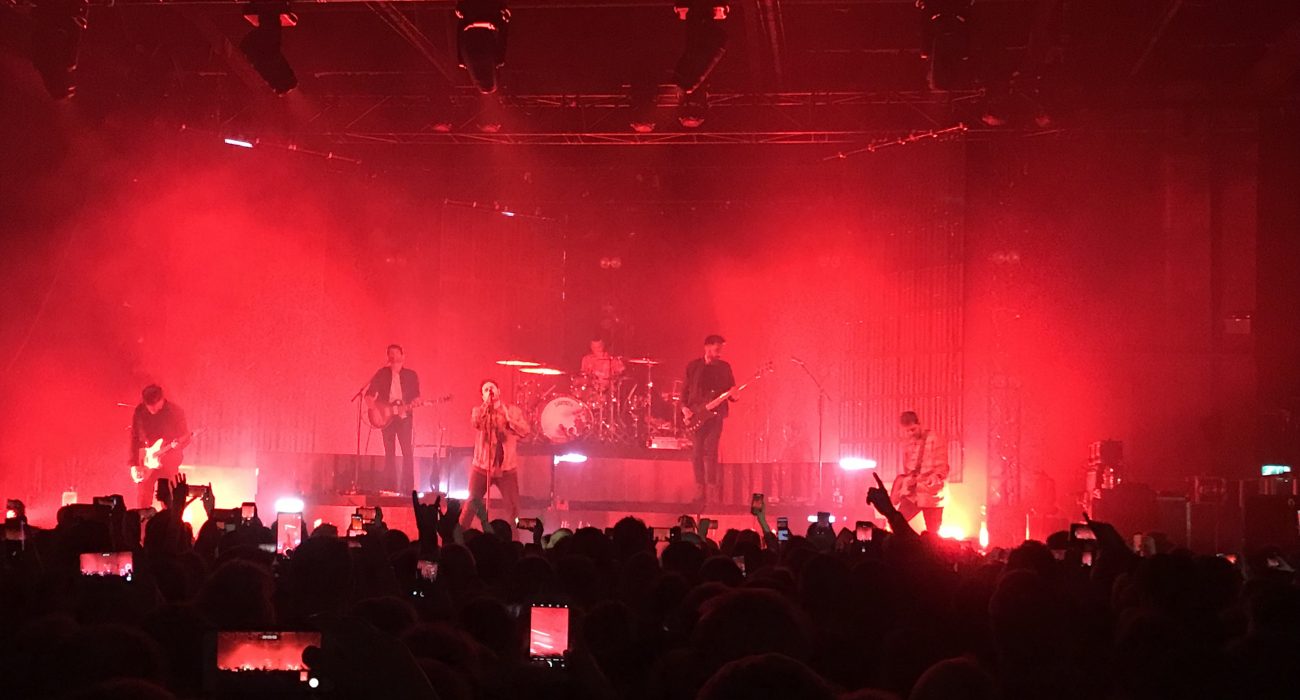 Written by Mia Edwards on 7th December 2018. Posted in News

You Me At Six are headed out on their epic 52-date World Tour. This is nothing new for them, but this tour is extra special because selected dates are also part of the Take Off Your Colours 10-year anniversary tour. This was their very first album and so they are playing it in full, alongside some of their newer hits. This didn’t stop them from throwing in a lot of their old songs on their first night at Manchester’s Victoria Warehouse, despite it not being a Take Off Your Colours night. The crowd was with the band for the whole show, but it is safe to say that these older songs got the biggest reaction. In particular, Save It For The Bedroom and Reckless were particular crowd favourites. Their staging included huge video screens with animations and lighting effects adding to the atmospheres of each song.

Frontman Josh Franceschi prefaced an emotional performance of Take On The World with a speech about his love for Manchester. As well as his admiration for the resilience and community solidarity shown in the wake of the Manchester Arena bombing in 2017. You Me At Six were supported by The Xcerts and Marmozets, both of whom delivered electric performances and quickly drew the audience in, gaining more than a few fans.

Ahead of the performance, I sat down with guitarist Chris Miller.

Fuse FM: You just dropped the Back Again music video, it just looked like you were having a laugh. What was it like to film?

Chris: Yeah, to be fair, it was a lot of fun! We just got to bowl all day and chill and dress up in stupid outfits. We’ve done too many videos now where we’ve taken it too seriously and try to be ‘the cool band’ and we just aren’t!

FM: Do you get a lot of input in the videos then?

C: Yeah, the ones on this campaign in particular! Especially 3 AM and Back Again, they were both our ideas and then we worked closely with the director, came up with the treatment together and we’re now good friends. So, it’s just like coming up with a crazy idea and then seeing what you can do. The 3AM was just supposed to be like how you think you’re doing on a night out, whereas in reality you look like an idiot! Then Back Again, we just wanted to take the piss out of a film basically. We all thought The Big Lebowski was a good one to do, because we thought it was a bit of a cult classic. So, if you’re a bit younger you might not know the film, but you could still get something funny out of the video. Whereas, if you have seen it, you sort of get both sides of it.

FM: This is obviously a huge tour, what’s your favourite thing about touring?

C: I just like being in a different city every day to be honest. It’s nice just going around, having a walk and seeing stuff. We’ve obviously been to Manchester loads now but we went to the Trafford Centre today, and I’ve been to Manchester thirty or forty times but never been there! It’s like Vegas in there! It’s ridiculous! So yeah, I just like seeing the different sites, especially when we’re abroad. There’s obviously loads of touristy stuff you can do or just kinda find some locals to take you about and show you what’s good!

FM: You’re doing the two nights in Manchester with different sets, how do you think they will compare?

C: I don’t really know, I’m sure quite a lot of people will come twice. It’s been fun playing the old stuff, it’s definitely fun for the crowd, because some of the songs off the first album we haven’t even played live before. Call That a Comeback, we’ve never played that live ever! So, tomorrow night will be like the fourth time we’ve played it! It’s a weird one for us and we obviously enjoy playing both of them but it’s nice for us to see the difference of playing the first album and then we chuck about 8 or 9 more songs after the first album at the end. So, people get a bit of both!

FM: If you could collaborate with anybody, who would it be?

C: It changes all the time, personally, as a songwriter, I’d really like to write a song with John Mayer, I think that could be really cool. I’m sure Max would probably say someone in the hip hop world, like we’re really into Anderson .Paak at the minute. Which is really cool because it’s got all the rap elements but still a proper band in there. I think we’d go for something completely wild and unexpected and see what happened.

FM: What’s been the best thing of your career so far?
C: There’re so many things! On every album we’ve released there’s been some defining moments. I think back in the day the first time we ever headlined the London Astoria was a big deal for us; because that’s where we grew up going to see bands. It’s not there anymore, so I’m glad we got tick it off the list quite early. Then moving through, moving up the bill at Reading and Leeds is a big thing for us, and being on the main stage there. Number 1 album was a big thing for us as well for Cavalier Youth, it’s just really cool for a British band that play guitars and isn’t in the pop world, to actually be number 1. We’ll just keep aiming high now and see what happens!

FM: You finish up the tour and then play Neighbourhood festival next year. It’s such a musically diverse line up, what’s it like playing shows in that setting?

C: Yeah, I think our day is us and Nothing But Thieves and then like George Ezra and other people like that. Our favourite shows to play are shows where we shouldn’t really be on, like ones that are a bit of a weird line up. When we first started, every show we played in our local scenes was just metal bands, and we were sort of just the pop band on the metal gig. I think for us, we really enjoy playing the first few songs and maybe the crowd’s not that into it, but by the end, everyone’s loving it, so we know then that we’ve done our job.

You Me At Six are on tour in the UK until 9th December before moving on to the European and American leg of the tour. 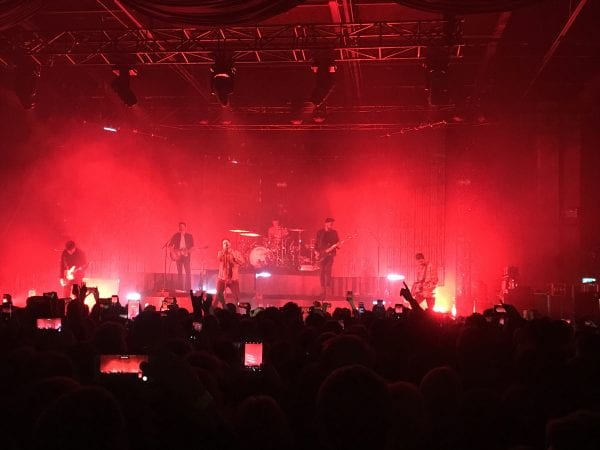 Tags: interview, live, Manchester, take off your colours, victoria warehouse, you me at six