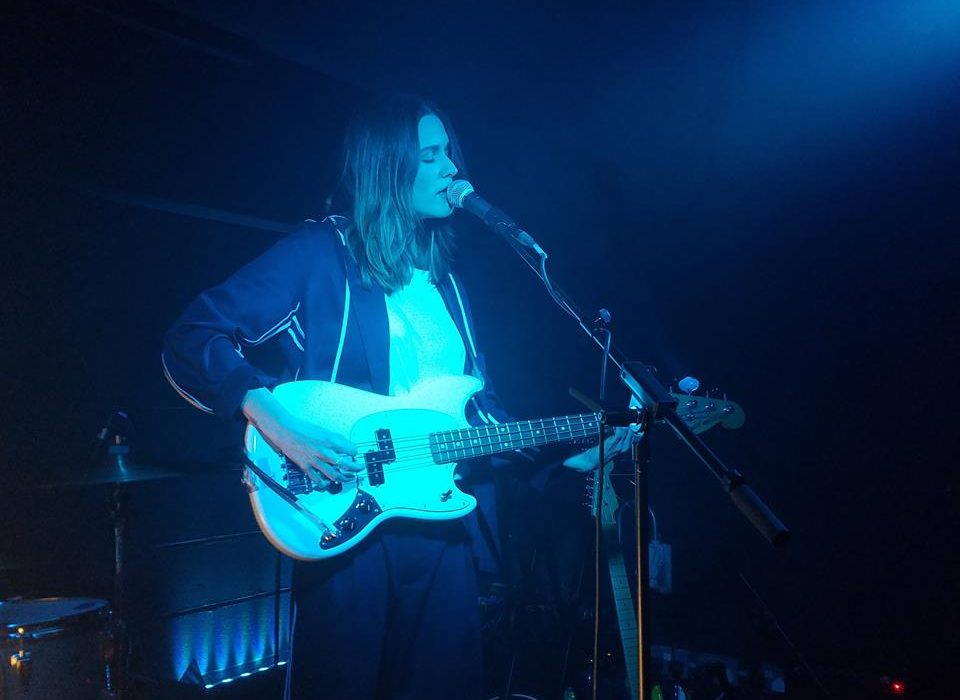 Written by Hannah O'Gorman on 21st October 2018. Posted in Reviews

Art School Girlfriend is the moniker of Polly Mackey, a Margate based multi-instrumentalist making waves with her own brand of mesmerizing electronic pop. After hearing of the rising buzz around Mackey’s latest project I decided to see her for myself, catching up with her after the show. She played in the basement space of Manchester’s newest music venue, YES, supported by up and coming dream pop outfit, Dream English Kid.

YES is a venue spread across four floors, each with a distinct vibe ideal for different events. We make our way from the bright stylish pizza bar into the purple glow of the club space below. I take note of a girl in a bright red work-wear boiler-suit thinking it was a pretty original fashion choice. I then notice another suit. Then another. At this point I realise this must be the support band dotted about rather than some lightning fast fashion development I was unaware of. Sure enough the four of them make their way to the stage like a sort of psychedelic British Gas team. 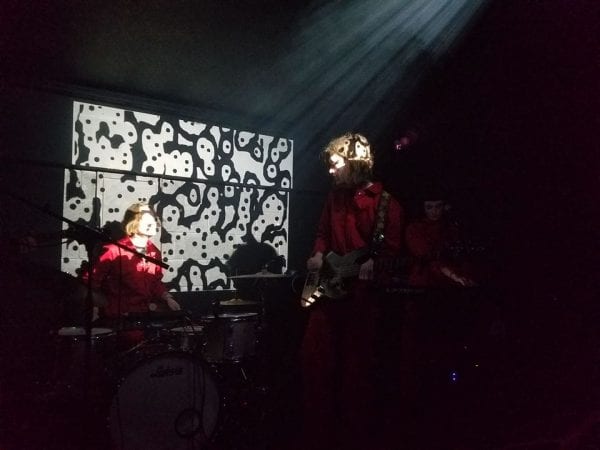 Dream English Kid swing into action, playing under grainy black and white projections of trapeze artists, pylons, tiny dancing shadows and more. Though seemingly random, the found footage fits together beautifully into a visual stream of consciousness. This compliments the melancholy dreaminess of Dream English Kid’s music. Heavily distorted guitars along with twinkly electronics and sweet vocal harmonies form a sound reminiscent of dream pop giants, Beach House, though often with a darker shoegaze spin. This is a young band with huge potential and a mature approach to their themes, namely the confusion of growing up in current times. With only one track available so far, I am very much looking forward to future releases. 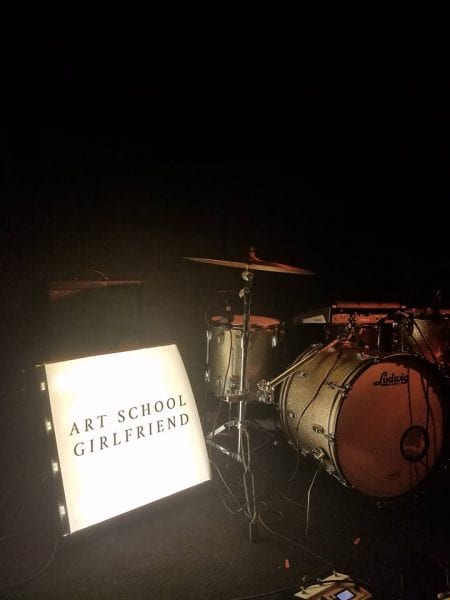 After a short wait, Art School Girlfriend arrives onto a stage flooded with blue light. A minimalist light box displays her stage name. This moody, stripped back set up creates the ideal setting to get lost in Mackey’s hazy production and sauntering beats. She opens with the flowing violin style synthesizers of An Uncomfortable Month from her 2017 EP, Measures. The band is kitted out with guitars, synthesizers, drum machines, drum pads and a traditional drum-kit bringing new depth to Mackey’s solo tracks. She tells us after the show that her songwriting process never goes from the beginning of the song. She starts with the sounds to be used and forms melodies and lyrics around them. Lately however, the band are somewhat more involved in the process. “It’s getting more collaborative now since I’ve been playing with the boys and now I’m more open to other people having input in the songs”. This shows in their live performance with the full band adding atmosphere and a more organic flow to the music.

The night’s closing track, Moon, is from Art School Girlfriend’s latest EP, Into The Blue Hour, released earlier this year. This is a track with a heavy focus on electronics. Its dark pop beat starts to wake an entranced crowd into a little dance to finish. Moon is a good example of her breakaway from previous guitar led projects. When her last band broke up, Mackey says she listened to a lot of pirate radio stations. In a sense, this cleansed her musical palate. Listening to so much new music has given her a new set of sounds to experiment with and left her less reliant on her guitar alone.

What shone throughout Art School Girlfriend’s set was the expressiveness in her face and voice in such a small venue. To see her perform live is to feel the emotion in her lyrics. There is an authentic yearning in her voice that leaves you longing without necessarily knowing what for. For that full intensity, I recommend you catch Art School Girlfriend playing in one of these more intimate venues. The aforementioned buzz growing around her releases was not misplaced, so I expect she won’t be playing in such small spaces for very much longer.

Check out Moon below: