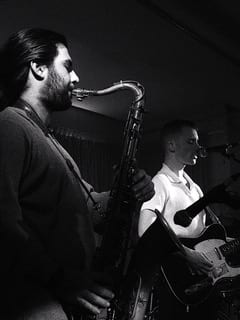 Written by Hannah O'Gorman on 24th October 2018. Posted in Reviews 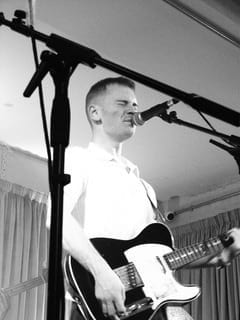 With a UK/Ireland tour, a few dates in East Asia and a new EP coming soon, Puma Blue, also known as Jacob Allen, is having a busy couple of months .
We met him before the gig and had a chat about what he’s been up to recently.

Walking into the appropriately named Pink Room at YES, we are greeted by a diverse crowd of people. The chill vibes of the crowd match the ambient lighting while we all wait for Puma Blue to start. Once the show starts, the feel of the room changes completely, replacing this patient chill crowd with one completely in tune with each other and the music.

Puma Blue, whose sound has no boundaries, besides a possible comparison to “Goth R&B”, greets the room with a super clean performance and fantastic sounds. The combination of the guitars, the saxophone, and bass melts so well into each other, giving the audience a brand-new sound experience different to anything we have ever heard live before.

As a venue, YES is perfectly suited to Puma Blue’s sound. The soothing pink lights match the soft and pure voice and nostalgic guitar sounds. The intimacy of the room contributes to the closeness we feel with the artist, giving it less of a performance, and more of an intimate feel. The whole event just feels as if the band is on the same level as the crowd.

The connection from Puma Blue to their music, hits a particular feeling, as their music gives quite a nostalgic feel from the tune of the guitars, and the use of saxophone solos.
The sound is incredible and the pink lights transform this already intimate show into a very sensual experience. Puma Blue gives a remarkable performance, the audience vibrates at every sax solo. The crowd cheers as Jacob eventually thanks the audience and the two support bands Sunken and Chartreuse; “the best bands in the world in my opinion”.

Your debut EP, Swum Baby came out last year and you have already got a new one coming up in 2 weeks.
—— 2 weeks?

Can you tell us a bit more about the new EP, Blood Loss?
—— Sure! It’s longer than the first one. It’s more like a body of work. Whereas the first one kinda felt more like a mixtape. It was just five songs, I tried to have some cohesion between them. This time it’s meant to be like a longer piece, so the tunes kind of fit together. I really prefer it this way, it’s really more about just like vulnerability and acceptance and think about things, and yeah if you like it’s just more bit more of an introspective piece of work.

I read that your new song Midnight Blue was produced in your bedroom. Are all the songs of the EP produced in your bedroom? Also is that a thing you’ve already been doing in the past?
—— Pretty much all of them yeah. There’s a couple tunes were I need the live band . So I’ll Go to the studio and do the work, in like a live room with all of us playing together. But most of the time, it’s just me and the laptop. It is just the easiest way I can articulate what I’m trying to do. I just like fussing around with it for ages on my own the entire time.

When did you start playing music and when did you start playing as Puma Blue?
—— I started playing music when I was seven years old. I got really into the drums, I was like a huge Red Hot Chili Peppers fan. And I just wanted to be in a rock band basically, or like a funk band or something. Then I started writing songs when I was 13, then I started playing guitar because I was fed up with not being able to contribute anything to rehearsals other than just drums. Then I left college when I was 18, and starting giging for a year or two before I started calling it puma Blue. I didn’t feel like it needed a name at the time. I was just using my actual name. That was in like 2015.

What is Puma Blue? It sounds really smooth.
—— Well, that’s part of it you know. You don’t really want a jarring name. If you’re going to pick a name, it needs to feel very easy on the tongue or it needs to relate to the music, even if it’s just in a linguistic way. I was just trying to get something that feels like an old blues guys name like Howlin’ Wolf or Lead Billy. Those two-part superhero type names. Blue just felt really appropriate to what I was trying to do to with the sound. It’s like a colour I’ve always been drawn to. And Puma was honestly just another thought put into it, just felt like some sort of slinky counterpart with the word blue so it kind of just stuck.

I really struggle to find a genre when it comes to describing music. I find it terrible to qualify things in general, but how would you qualify your music or the direction it takes?
—— I try not to. I think it’s more than intention than a style of genre. I always try to make music with the same soul to it, the same direction but not necessarily like the sound. So I don’t know. It feels kinda dynamic? I like sort of heavy and soft at the same time, like light and dark. Someone once said like “Gothic R&B” and I really like that. But I really don’t know, but I guess in a really boring way it’s just alternative rock. People call it jazz but it generally isn’t either. People call it straight up soul but I don’t know either.

So tonight’s show is part of the UK/Ireland tour. How is it going? How many shows are you doing?——Great yeah I’m really tired. This is day five and were doing 4 more I think? It’s really nice, I love touring with the boys. Because we are all really close and it’s really exciting getting that feeling from different cities each night you know. It’s never just the same crowd.

This venue is new so obviously you’ve never played here, how is the sound? I heard its really good.
—— Really good and it’s always a rule with new venues that they haven’t set up everything properly yet but it’s really good in there. I came off stage feeling really comfortable.

I read that you have a tour in Japan and South Korea. Like why? How?
—— I know! That’s what I am asking myself too! Basically we got an offer to do one in store gig out in Japan, like retail. And it paid enough for us to get a flight so we thought why wouldn’t we do it?

And do you have a fan base there?
——Yeah apparently, we’re doing pretty well in Tokyo. People are ordering vinyl out there and stuff. And we thought while we were out there, let’s just book our own show with a headline slot. And off the back of some crazy big Korean pop band sharing one of my tunes, we’ve got a following in Korea now as well. We’re just going to cross over the pond a little bit and play in Seoul for one or two days and head home.

I think I’ve asked all of my questions so I’ll ask what have you been listening to lately?
—— Yeah the new Mansur Brown album is incredible. He’s a friend of a friend and I’ve met him once or twice but yeah he’s just a crazy guitarist. He just dropped an album and produced it all himself and it’s really cool. I just thought it was all going to be lots of like jazz stuff but it’s way cooler than that. I recommend that since I’ve been listening to it quite a lot.

Thank you for having us. It’s like our first interview and we’re going to try and do it live on our radio show. Because we want to have bands kind of come in and do podcasts and that kinda stuff. So thank you.
—— Oh that sounds so cool. No worries.

Listen to Puma Blue below: