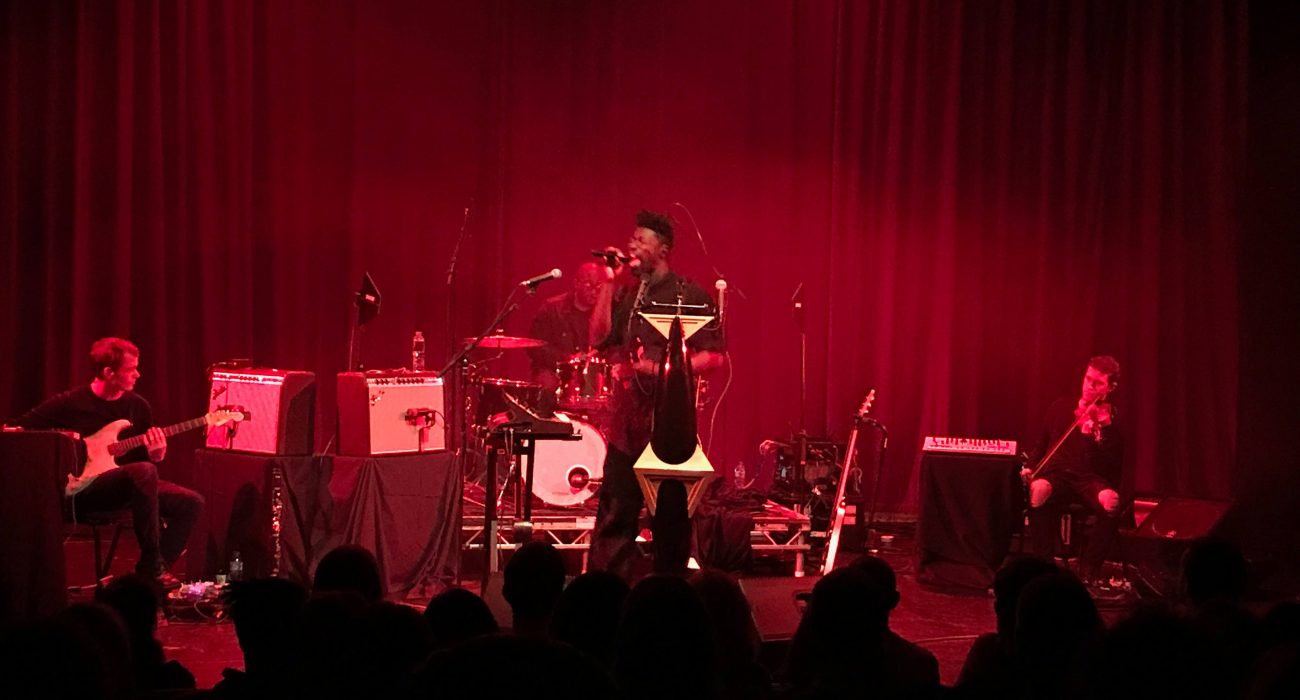 Written by Mia Edwards on 24th September 2018. Posted in Reviews

Upon entering Manchester’s Oxford Road Dancehouse this Wednesday gone, I wasn’t
entirely sure what to expect. This time last year I missed out on Moses Sumney’s London
show, and so now was my chance to catch him at last. Having finally seen him perform live,
I’ll be making sure not to miss the next gig. It’s been a number of days since the show, and I
still find remnants of his enigmatic, hauntingly beautiful vocals, lyrics, and production
swirling around in my memory. The idea of being nestled in an intimate space, immersed in
the deeply sensual sounds from his album Aromanticism, now feels like some short surreal
dream.

It was my first time being in the Dancehouse to see an act, and the 1930’s Art Deco complex
perfectly accommodated the other-worldly atmosphere I was soon to experience. We were
welcomed by Moses’ support ESKA, an inventive and idiosyncratic female solo artist. She
performed a diverse range of music merging folk, soul and electronic sounds, completely at
ease with herself and with the eccentric world that she inhabits. Her dynamism via vocal
and electronic experimentation perfectly set up what was to come after her set.
Through a haze of hanging red mist, dressed in his casual loose kimono, Moses made his
appearance. Opening with the clean and crisp plucking of the guitar on ‘Don’t Bother
Calling’, he instantly put the audience under his spell. It was this ability to naturally tap into
the crowd, through his dizzying range of falsettos, carefully crafted loops, vocal layering and
even his own towering presence, that made such a lasting impression on me. Throughout
the evening his great attention to detail in crafting intricate background soundscapes
proved how meticulous he is as a musician, and this was integral to creating the ethereal
and other-worldly atmosphere that filled the room. All of this was facilitated by the skills of
three talented multi-instrumentalists in his band. They expertly merged guitars, violin,
clarinet and keyboard to give each song its own unique sound. One fine example came with,
‘Lonely world’, in which light guitar and a controlled backbeat slowly descended into an
exhilarating heart-stomping anthem.

Despite Moses’ attention to building an immersive, encapsulating atmosphere in the
intimate Dancehouse theatre, he still found room for moments of humorous interaction
with the audience. For several songs, he sought assistance from the audience to amplify the
background vocals. But before doing so, he jokingly added ‘if you don’t know how to sing,
just be supportive of those who can!’. I took this advice on board and remained dutifully
silent and supportive. Moses also snuck in a number of covers before the end of his set,
including Bjork’s ‘Come to me’ and a playful Amy Winehouse crowd-pleaser, ‘I Heard Love is
Blind’. Even an enthusiastic heckler in the crowd got his wish for Moses’s own ‘Man on the
Moon’.

For the encore, I believe everyone in the audience saw the full worth of their ticket with
Moses’ final and arguably most popular song, ‘Plastic’. The gentle lilt of this piece brought a
dreamy finish to a genuinely moved audience. Through the mournful confession of
vulnerability in the refrain ‘My wings are made of plastic’, Moses reminds us that despite his
ability to captivate and entertain with such a spectacular performance, he too is human,
fragile, and he finishes with the reminder that there is an element of beauty in such things.