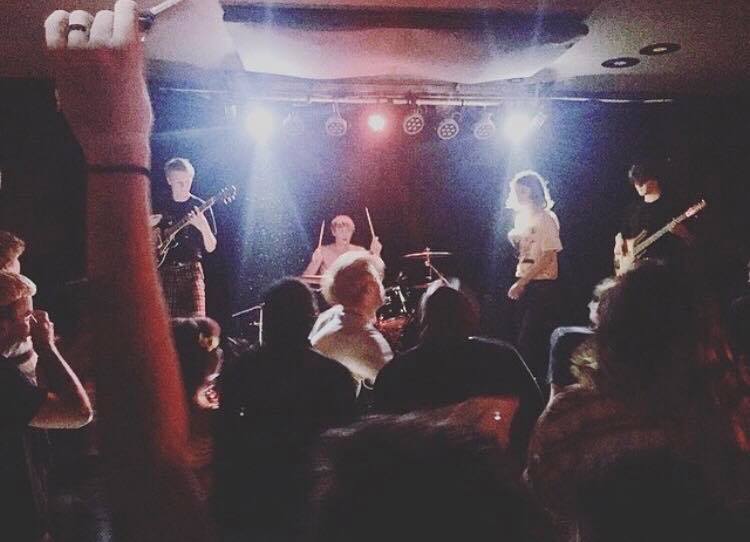 Written by Jacob Thompson on 7th September 2018. Posted in Reviews

August 30th, 2018, and the Fuse crew descended on Nambucca, north London, for our first gig of the year. Proto-post-punk rockers Scout Leader did not disappoint, bringing together a smorgasbord of far flung fans for an unforgettable evening. The atmosphere in Nambucca calmly escalated from relaxed family get-together to a deep-dive mosh, with supports Dreamherbs and Flaccid providing a clean run up to the main event.

Dreamherbs, a Walthamstow based free jazz duo drew the first of the night’s dancers to the stage with their mix of ambient and heavy sounds, blending dreamy guitar riffs into heavy choruses and turning lilting lyrics to screamed solos at the drop of a hat. Hot off their heels, psychedelic punk four-piece Flaccid served up a short but sweet set of headbangers to get the crowd ready and riled up for a good old bit of floor-scuffing – they were, as they’ve often said of themselves, ‘a bit noisy’, and all for the better.

For from the noise emerged first-time headliners Scout Leader, smashing straight into their set with a high-energy heart attack of an opener. Charlie Butler’s thunderous voice merged perfectly with the tightly controlled chaos of Linus Munch’s distorted shredding, and bassist Tom Allan provided a well-placed weight to round out their sound. The crowd surged along to the pull of the music and every head in the room tested the strength of the neck beneath it to the beat of drummer Alfie Blundell’s skintight rhythms.

Where Scout Leader really excelled was in embracing the latent power in their enrapt audience, tapping into the raw energy present and launching themselves into the crowd at every opportunity. Shirts came off and sweat swept the floor right up to the grand finale, a bunker bomb of a banger, over as fast as it began, passing by in a hurricane of stage dives and tossed instruments.

As Scout Leader’s loving fans charged forwards to embrace the band one cautious soul managed to spare Linus’ discarded guitar from the stampede – but there’s no real worry here; even should they lose a few instruments along the way, this lot are going places.

See more from the bands here: