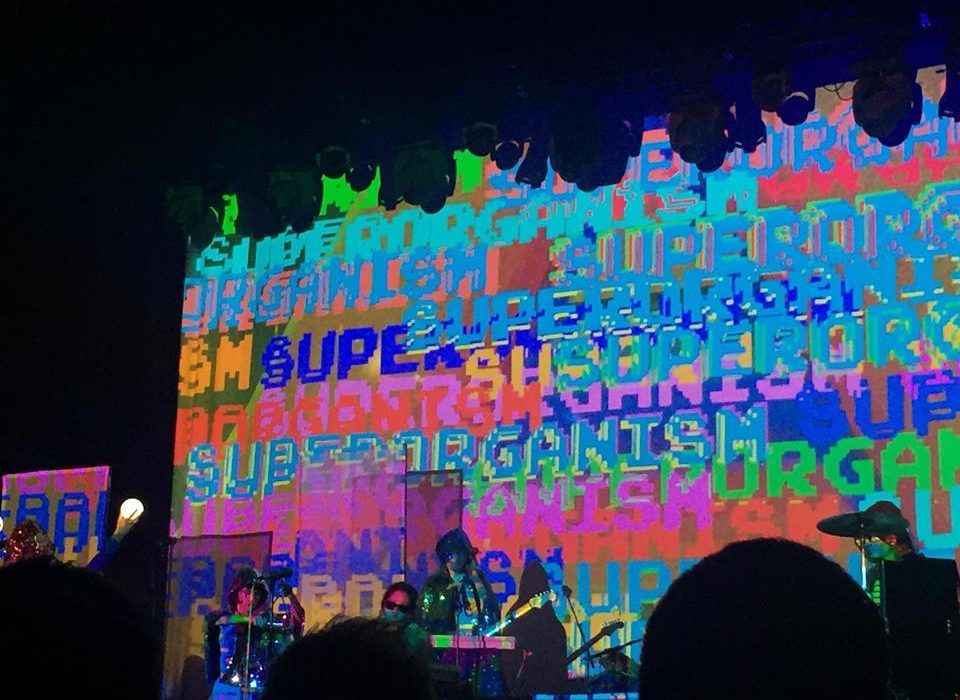 Written by Hannah O'Gorman on 31st October 2018. Posted in Reviews

Superorganism have ruined concerts for me.

On Thursday 25th October I lost my concert virginity. And yes, I realise that you are already questioning my authority as a music journalist. What would I possibly compare it to? But who can blame me for wanting to save myself for someone special? I don’t want to be wasting my tickets on the Wiggles. Fortunately for me, eight knights in shining armour came to court me in the form of Superorganism, an indie pop band based in London.

This is a band who understands both fans and those with short attention spans. The fact that their eighth member is Robert Strange, a visual graphic designer, meant that my millennial vine-watching eyeballs were never short of something to look at. That, in addition to the heavily sampled electronic music with seven musicians playing at once whilst doing quasi-choreography, is overstimulating in the best way. I felt like I was watching something new and perfect for a generation who can’t watch a film without their hand physically aching for their phone. At the same time, this feels ironic for a band whose lyrics seem counter-cultural, as seen in Everybody Wants to be Famous, and Reflections on the Screen. Perhaps it’s not that deep, and as someone who revels in meaningful lyrics, I let go and enjoyed the band for what they are, some really neat sounds.

Now call me a potato-brained dimwit but there is something innate in me that gets the biggest rush from someone merely mentioning somewhere I’ve been. Superorganism knows this. Now although I am inexperienced, I know that they didn’t invent bands mentioning the name of the city they are in, but they went beyond this. Orono consistently addressed us as Manchester, and on the screen during Night time there was video of her cycling down our very suburban streets. Now you may feel that this is a primitive thing to be pleased about, but it all contributed to the idea that they were thrilled to be there, and by proxy, so was I!

At this point I must play on an instrument of my own, your heart strings. Growing up a mixed race, round faced POC, I knew early on that no one in music looked like me. I remember being very keen on Noodle from Gorillaz because that was the only representation I had. Therefore to see Orono on stage made me feel unnecessarily emotional, one day she will be someone else’s Noodle without the racially insensitive namesake and made of actual flesh and blood. At the ripe age of 19, she runs the whole gambit. To put that into perspective, picture a fresher conducting a crowd of all ages, and performing what is essentially stand up with no material mid-show. Plus, imagine if that fresher could state that “Oasis isn’t that great” on a Manchester stage and not get mauled alive. Freshers can’t do that, but Orono is no fresher.

In conclusion, I will never forget this gig, and in order to preserve my memory of it I went so far as to review it. The epilogue to this is that I did go and see another gig, and although the jangly sound of boy pablo are somewhat soothing and fitting for a Made in Chelsea trailer, like some overworked meringues, I have peaked too soon.