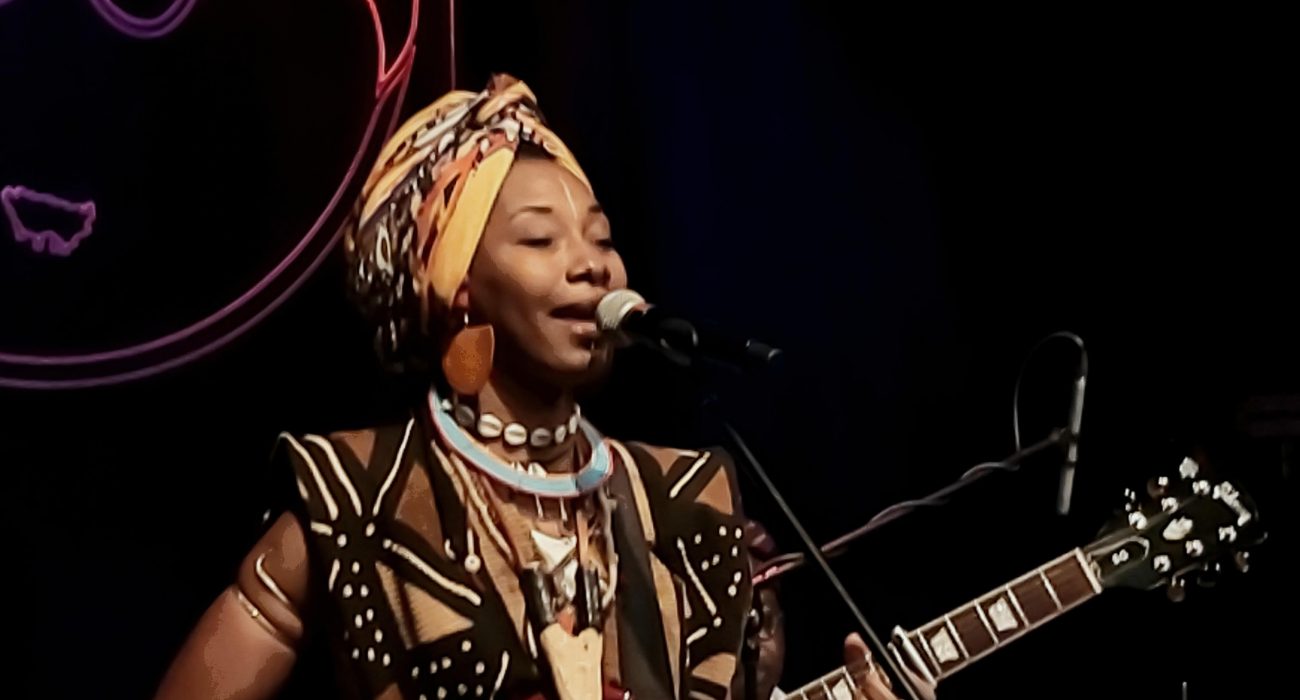 Review: Fatoumata at Band on the Wall

Last Friday I was fortunate enough to catch Fatoumata at Band on The Wall in Manchester.

The fact that I could watch a Malian-parented, Ivorian-raised, French and Wassalou-speaking artist in Manchester highlights an ever growing connectivity in our globalised world. Fatoumata brought a microcosm of her own culture, experiences and heritage to a fortunate crowd. I shall forever count it as one of my most cherished musical experiences.

Fatoumata and band played through their impressive discography, showcasing both released and unreleased music. The joyous Nterini was most impressive, however Timbuktu Fasso brought the crowd into near enough frenzy. Bonya showcased the afro beat style which enriches every aspect of the performance. Each song was different; in rhythm, in inspiration and style. But all were performed to the highest level of showmanship and sophistication.

I had first caught glimpses of Fatoumata on her Colour’s Show; a succinct and honest showcase of her raw artistry. Yet I would critique the Colours format slightly, they forget the band. Whilst I have utmost praise for Fatoumata, she and her band are one and the same, their brilliance is holistic. Woodstock-esque guitar solos, military precision drumming, grooving bass lines and rhythmic, funky keyboard-playing all complimented the energetic, ethereal performance of Fatoumata.

Perhaps most impressive though, was Diawara herself. Her performance was exuberant, flamboyant and grandiose, and still somehow completely effortless. Her smiles (and an honourable mention to the ceaseless grin of the guitarist) penetrated into the crowd and spread like wildfire. I felt as if I was at some kind of family bacchanal; wild and raucous, yes, but simultaneously virtuous and controlled. The crowd was alive with the energy emanating from the stage, one could dance with anyone else, feeling as if in the presence of some great leader or religious figure. It is too easy to become lost describing the ambiance of the night, a mention must be made of the technical prowess of both band and leader. Fatoumata complimented her band with an impressive vocal range, rhythm and style. Beyond vocals, Diawara showcased her prowess on guitar with solos reminiscent of the 60’s, ecstatic and energetic dances, as well as a seemingly inhuman level of stamina.

To paint the level of showmanship most accurately, I would point out Fatoumata’s laconic but powerful interludes between songs, her free flowing narrative of thoughts which provided an insight into her perceivably complex edifice of both political and philosophical thought. Through her short speeches one could gain an insight of her understanding of a deeply complex and subjective world, one in which the crimes and misdeeds of the past are not yet healed. Yet her thoughts about Africa, the female role and even humanity’s place in the world provided nothing but hope. A desire to heal and appreciate our diverse, albeit damaged, patch of matter.

I always admire and relish in musicians who recognise their inspirations. It is often telling and provides an insight into the character, background and heritage of the musician. Like meeting a friend of a friend, the shared connection allows for a more genuine and organic interaction. Therefore I felt even more a disciple of Diawara when she loudly proclaimed her inspirations. Fatoumata gave praise to Fela Kuti, the legendary Nigerian Jazz/Afrobeat leader, then breaking off into a Kuti-esque piece, performed with inflections of Fatoumata’s own style. She praised a personal favourite of mine;  Oumou Sangare, a Malian Wassaoulou musician, who acted as mentor to Fatoumata in her early years.

Moving to my personal favourite credit; Nina Simone. Fatoumata’s rendition of Sinnerman by Nina will remain my personal high point in a consistently flawless performance. Fatoumata’s impressive vocal range, as well as the skill of the band accompanying helped shaped this into a personal tribute from one great to another.

I hope this review has achieved the impossible, to document and review an outstanding and otherworldly experience. I would implore any readers to listen to an album, buy a ticket, support this artist, her band and her message.