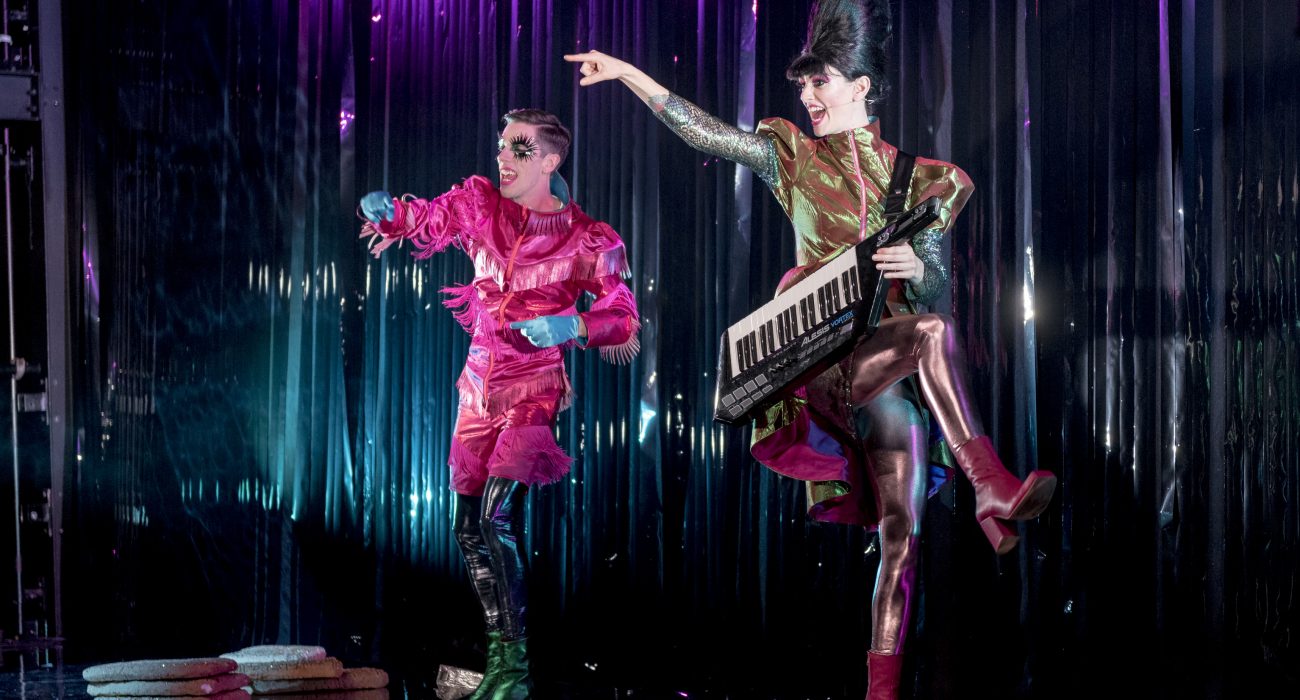 Insane Animals delivers something which can be best described as the bastard child of a TED Talk and a cruise ship cabaret, something one must- and should– see to believe. Roughly seven minutes into this musical I sipped some non-alcoholic tap water to quell my cough when it immediately dawned upon me that I was going to need a stronger drink. This is not as a means of coping but a necessary enhancement of the high octane low-brow exegesis of humanity.

The intent of this play is to offer a perspective on humanity in its current dystopic state in the most joyously camp way. In this our narrators and leads performed by Bourgeois and Maurice are two time travelling aliens with the hope of saving all ‘human-sexuals’. They travel from the near flamboyant and shiny future back to ancient Sumer to witness at the oldest known story ‘The Epic of Gilgamesh’. Although that alone may sound like the zany idea of a school play, this is only to its advantage. Any of the profundity experienced in this play feels much less contrived but incidental; you rarely have time to notice yourself engaging with questions of the ‘human-sexual’ condition whilst you find yourself sheepishly sniggering at crude jokes about fisting, Brexit and heterosexuality.

Although this performance boasts a large budget it still feels endearingly cheap. Bourgeois and Maurice never cease to undermine themselves and make you in the audience feel a part of the display. One is never left alienated or as if they are trying to be taught anything but instead taken hostage with the action that is happening onstage. The set is covered in tin foil, sequins and glitter, which only offers a more intimate and seedy feel. There is a relatively high joke rate, most of them land well and even the ones that don’t still keep you buoyant and attentive. As well as Bourgeois and Maurice, every other cast member is extremely talented and watchable, especially Emer Dineen who had big Mariah Carey energy and excellently delivered very challenging ballads.

Overall, this musical is a lot of fun and then packs in a little bit more. It is unlikely you will leave this feeling deeply inspired or edified, harbouring a newfound perspective on humanity, however a baggy sense of optimism and a song to tap your pen to is close to guaranteed. Best of all, the joyous and catchy music will leave you much more vulnerable to accidentally declaring to a bus driver ‘I am gay for you’ instead of ‘thank you’. This alone makes it all worthwhile.