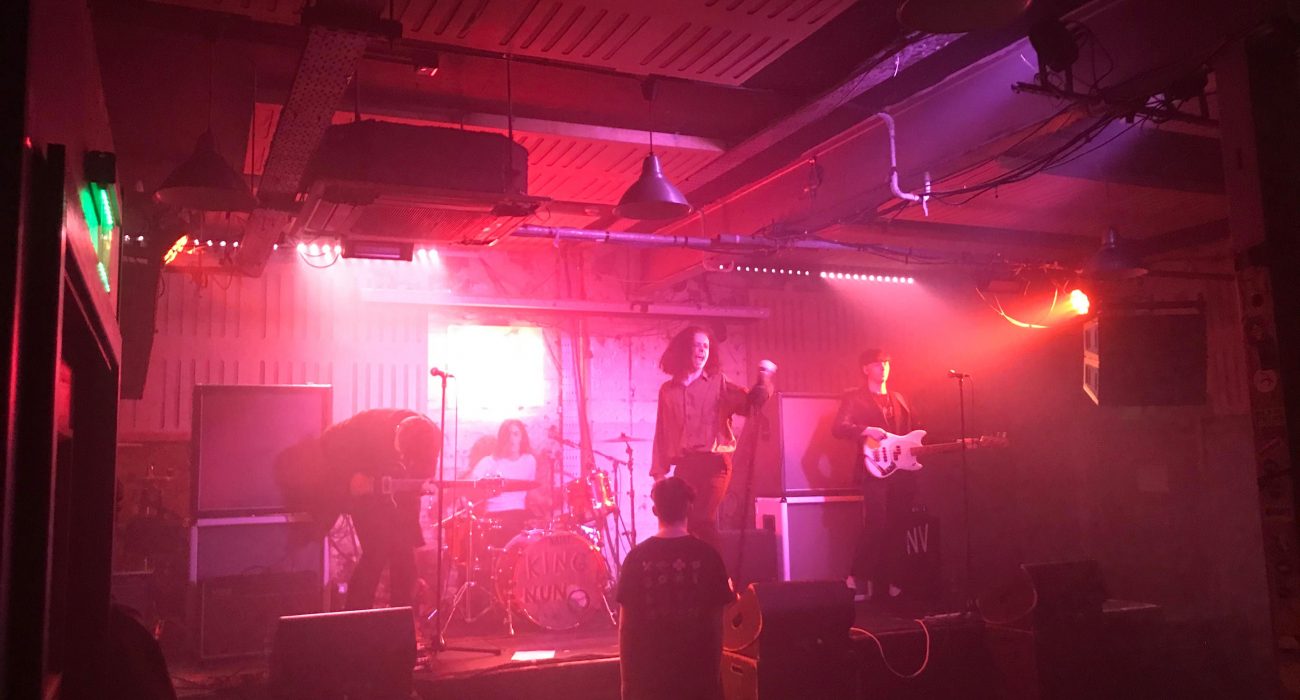 Last Monday I saw King Nun at Soup Kitchen. Loud, energetic and bold, they created a powerful atmosphere despite the cold Monday evening.

Early in the night I spoke with Theo, the lead singer. We talked about the tour’s success, despite illness, the process of recording their latest album – Mass, and plans for the future. A charming joker, Theo seemed elated at his recent successes with the band, and told me he was looking forward to playing to a Mancunian crowd, with our unmatched energy and love for the music. He spoke about standing on a rooftop in Belfast, and looking out over the city, realising he had ended up in a job where he got to travel to lots of beautiful cities, expressing his love for the music and the live scenes he gets to see; you can listen to the whole interview on fusefm.co.uk, Saturday at 5 on Pass the Aux.

Kicking off the night were The Novus, and the set was off to a fast paced start. The band oozed style and aggression, creating a punky and distinct sound. Interesting guitar tones and thunderous bass and drums supported an expressive and wild frontman. Following were No Vacancies, with a more laid back and indie sound, sending tremors through Soup Kitchen. Catchy licks and a smiling band captured the audience as excitement for the headliners brewed.

Anticipation built as the four piece from Twickenham then kicked off, with heavy and punchy sounds rippling through the basement. Driving drums and bass carried the energy, as complex licks from the lead created a dizzying and electric punky, yet alternative sound. Frontman Theo tore around the stage and the crowd, a true showman, and chatted extensively with the audience between songs. They played some of their unreleased material, which is somewhat pushing the boundaries of punk and alternative rock, giving them a truly unique and interesting sound.

We were also treated to an acoustic song which was a great moment in the gig, a mesmerising atmosphere as Theo went completely unplugged to sing for us in the basement of Soup Kitchen. The band then rejoined him to give us one last energetic song.

Thumping drums, heavy driven bass, and a fuzzy lead blended with the bold front man to give us an engaging and energetic live show. I think King Nun still have big things to come, with more music in the works and a thunderous and exciting live energy; watch this space.