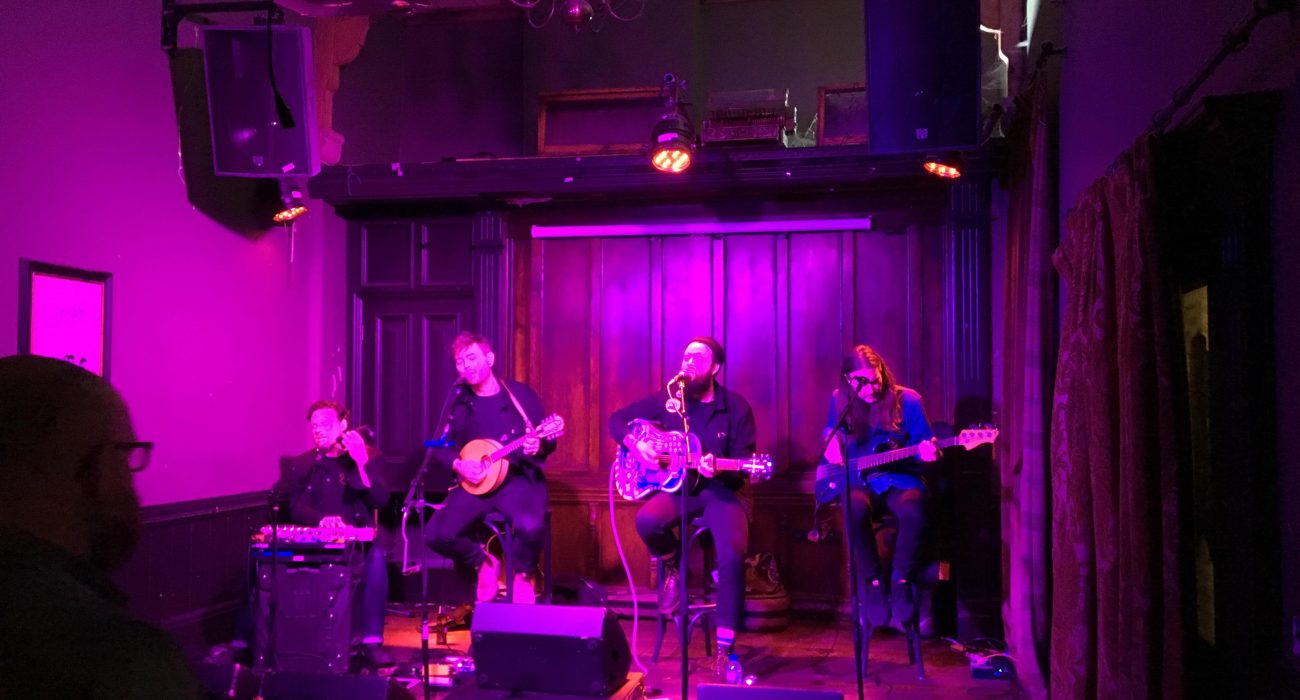 While walking back from the Castle Hotel last Tuesday mulling over how best to articulate the content of this review, there was one moment to which my mind kept returning returning. Rather than something I had witnessed that night, it was a sentence that I had uttered 3 years prior, sitting in my university interview being asked why I wanted to study in Manchester. A few muttered lines about the quality of research at the university and employability were followed by perhaps the only part of that answer which told the truth; ‘and of course, Manchester has a great music scene.’ About three years later, and two and a half years into my study here, it would be hard to look someone in the eye and tell them that I have made much of an effort to properly explore the music scene I was so in reverence of before. With this in in mind, when an opportunity to review the music of Leeroy Stagger (a man I had never heard of before) arose, I jumped at it.

My initial enthusiasm was swiftly curbed as I turned up to the Castle Hotel to find a grand total of fifteen people in attendance, all bobbing their heads in the traditional folk rock salute . The emptiness of this usually cramped venue was only made worse on discovery that 7 of the crowd consisted of the support act and his mates who, after talking through the first three songs of Stagger’s set, shuffled out in search of something else.

If there were ever a band for the Carhart-wearing, craft-ale sipping boys of the Northern Quarter this was it; small town British Columbia’s answer to Mumford and Sons. It looked as though beards, boots and banjos would be the order of the night. While the music I had listened to in anticipation of the gig had not taken my fancy, I was interested to hear how the band was going to mould their ‘electro-folk’ sound into something that could be played live while remaining distinct from standard acoustic folk-rock. What I thought was an interesting question was to be answered with the worst of responses; that standard acoustic set I had so feared. Still, cynicism set aside, I endeavored to find something to write about.  What I produced were some unremarkable points about how the narrative lyrics had an aroma of Springsteen and the close harmony and guitar brought shades of Dylan and Cash joint projects to the performance. Needless to say, were either of these comparisons fair, Leeroy Stagger would not have been playing the Castle Hotel in front of 10 people on a Tuesday night.

All of this brings me back to my walk home from the Castle Hotel and the memory of that sentence. While Leeroy Stagger and his band had not been a great performance, I was returning home feeling that I had spent my night well. My night was certainly made by the enjoyment of hearing something I hadn’t before, in somewhere interesting for not very much money. The fact that I had enjoyed my night so much begs the question as to why I, and others who feel similarly, do not go to more live music? There are of course aficionados of the live music scene here in Manchester, able to tell you when and where each live performance is going on and how to find good value. For those less on the buzzer, efforts to find cheap, live music in Manchester are often difficult; the last google search I submitted pointed me in the direction of large venues like Soup Kitchen and Gorilla rather than more intimate setting like the Castle. Even were you to find a venue you liked hosting someone that interested you, it can still be expensive. A ticket to see Stagger play last week would have set you back around £8; a price that many will dismiss and justifiably so. Once can only assume that in order that the supporting cast are fed and healthy, prices like these are necessary. Sadly, this now seems to be the fate of live music outside of major artists; expensive and empty. I can only hope, for mine and Stagger’s sakes, that this was a freak night and all is well over the rest of his tour and in my quest find what I’m after.