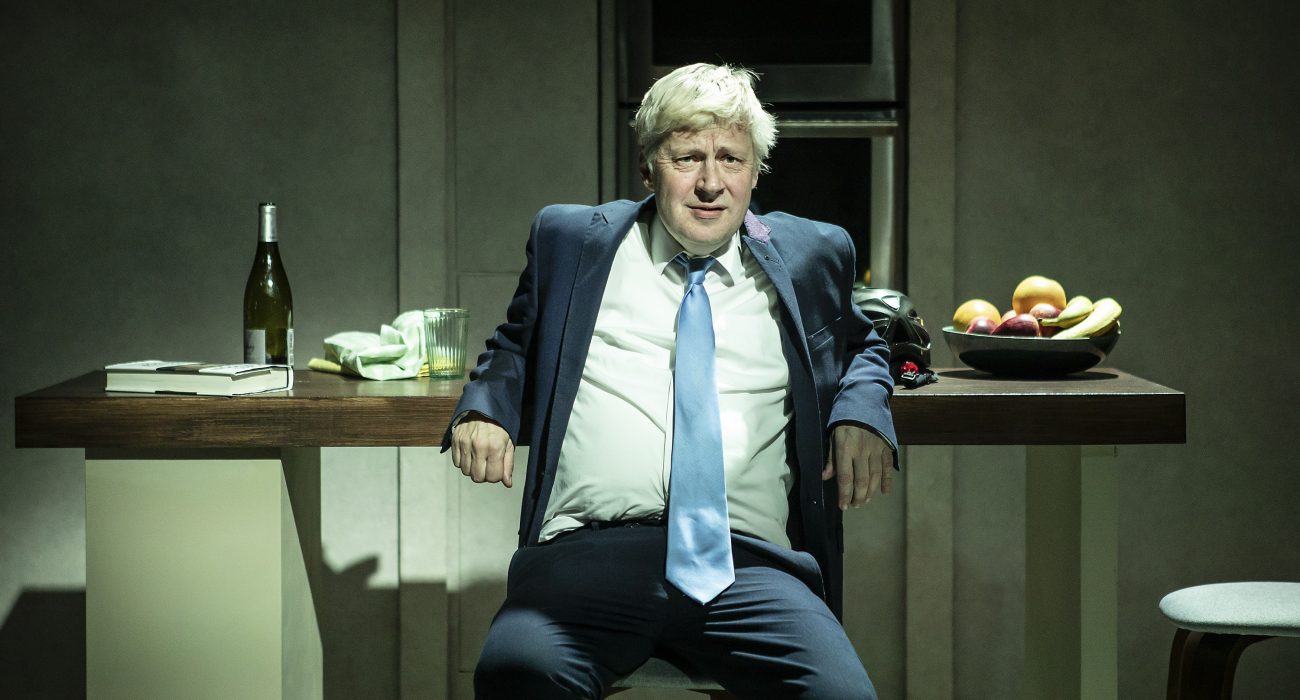 Since 2016, the United (for now) Kingdom has lived a soap opera existence. Arguing factions of Remain and Leave, both in parliament and the public, have divided the nation. We have seen the emergence of some incredible political characters and now, four years after the referendum, have reached a point where many have suggested that there is no other option but to laugh at the madness that surrounds us. In short; we are living in a satirist’s dream.

With the nature of events being so theatrical, it was about time they were given their rightful place on stage. Enter Jonathan Maitland, an ex-BBC hack turned playwright, with his two-act offering: ‘The Last Temptation of Boris Johnson’. With sights firmly trained on Britain’s bombastic premier, Maitland does not hold back in his pursuit to unpick why Boris backed Leave.

The first act charts the course of an infamous 2016 dinner party where our protagonist, and standing Prime Minister, Boris Johnson hosted Michael and Sarah Gove alongside billionaire Evening Standard owner Evgeny Lebedev. It was that night that Johnson reportedly settled on nailing his colours to the mast of the Leave campaign, turning the tide on the UK’s, and his own, political narrative. These, and Johnson’s then partner Marina Wheeler, are not the only characters present in this imagining of the night. In Dickensian style, Johnson is visited by manifestations of his own mind in the forms of his idol Winston Churchill, The Iron Lady and Europhile Tony Blair. Talk of legacy, power and the fear of making a mistake follows, culminating in a decision that has shaped the environment in which live today.

After supper, we are guided through a theatrical montage of Johnson’s biggest hits, both good and bad. We see the referendum result come through to the faces of a stunned Johnson and Gove, the crossing of Johnson by the same man who pledged to support him in a 2016 leadership bid and finally victory over Jeremy Hunt in the most recent leadership race, handing the ultimate prize to the man who once wished to be ‘World King’.

The second act looks forward to the Britain of 2029. The country, now led by Westminster gym-bunny Dominic Raab, is in recession and even the hallowed BBC has been privatised by Amazon. Johnson, deposed after only 3 years in office, has embarked on his sixth biography of Winston Churchill and finds himself discarded on the political scrapheap. Far from his ambition, and seeking therapy from his Alexa, Johnson is handed a lifeline when the Chief Whip presents his case for a third run at the leadership. The caveat; that Johnson must turn his back on the cause he once so vocally supported and run under the policy of rejoining the EU. What follows are his attempts to rejoin the top brass and cement what he so desires; a legacy.

One of the challenges presented in writing a political satire is balancing the mockery of your subjects with material of substance, a feat achieved, on the most part, by Maitland. Filled with the standard mockery of Johnsonian idiosyncrasies, this work also presents a more human depiction of a man so many have come to despise. The use of Churchill, Thatcher and Blair to confer the inner workings of our protagonist’s psyche paints the picture of a man torn about where he stands and facing immense pressure from the likes of Letwin, Gove and his wife Wheeler. Even the most avid detractors of Johnson might go so far as to feel a modicum of pity as the shell of Johnson is on full display at the beginning of Act two. These feelings, however, are quickly banished as we watch ambition get the better of Boris, clawing at whatever he can to cement his legacy. At some points, the base mockery of Johnson seemed overdone, particularly in act two where his lascivious tendencies begin to feel like the only punchline.

That is indicative of the second act as a whole, which paled in comparison to the first. Brimming with sharp political jokes and coupled to brilliant caricatures of the subjects, the re-telling of supper struck the perfect satirical balance. The depiction of Johnson was open to jeering but underneath portrayed a man fixated on power, recognising his skill as a politician in the process. The second act gave way to cheaper jokes and  it began to feel like a pantomime with the audience reacting as such. This, perhaps, is down to the difficulty in creating satire out of events that are yet to happen. As I watched Johnson’s ambitions crumble, there were points where I lost interest and the lines that had entertained so much previously now felt blunted. It seems disappointing that the brilliant concept of BRENTER, as the fictional Johnson dubs it, was unable to reach its potential.

Whilst the five person cast are all brilliant, it is worth mentioning the performances of two cast members in particular. The portrayal of Blair, played by Tim Wallers, is fantastic. The script provides the foundation for this but Wallers captures the essence of ‘Captain Charisma’ entirely. Waller gives a performance that drips with the slick, and some may say slimy tones of New Labour spin. Also notable was Claire Lichie’s performance as Marina Wheeler. It would be easy to fall into the trap of portraying this character as ‘The Wronged Woman’, but Lichie masterfully marries Wheeler’s ambition and success with the most subtle allusions to the hurt caused by Johnson’s infidelity.

Finally a nod to Louie Whitemore, the production’s set and costume designer, is due. The set is minimal, giving scope to quick scene changes and drawing attention to the actor’s performances rather than elaborate constructions. Despite this, it holds many surprises, allowing for shock appearances through the oven or the wine rack and entertaining with its ingenuity in the use of space.

Despite what I found to be a disappointing second act, this play captured my attention for its majority. This is a performance that will give you what you want as an audience member. Going in as a critic of Johnson you will not be disappointed as he comes out humiliated, fulfilling a fantasy that many wish to see in reality. However, viewing with a more reasoned approach allows for an interesting examination of power and what Johnson, and perhaps many of us too, would do for it. This play will certainly secure Johnson’s legacy in the eyes of its audience, although it may not be the one he might have hoped for.