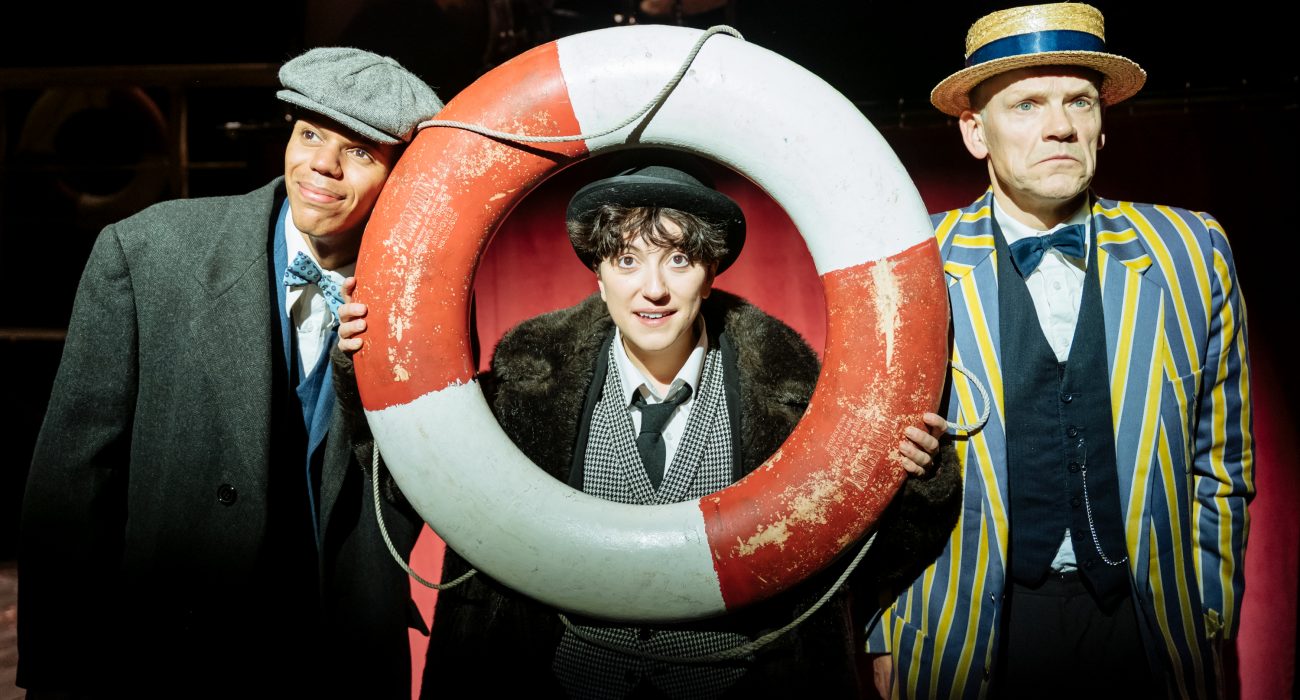 Review: The Strange Tale of Charlie Chaplin and Stan Laurel

Written by Mia Edwards on 10th February 2020. Posted in Arts and Culture, Reviews

In 1910 a ship set sail for New York. On board were Charlie Chaplin and Stan Laurel. They were travelling with Fred Karno’s famous comedy troupe, Stan as Charlie’s understudy. It was to be a fateful journey, setting them on their way to alter the course of cinematic history. The Strange Tale of Charlie Chaplin and Stan Laurel (written and directed by Paul Hunter) combines fiction and fact, fantasy and reality to create a live silent film which incorporates elements of music hall. The result is an exquisite, anarchic bio-drama.

This production – co-commissioned by London International Mime Festival – comes to Manchester via the Theatre Royal Plymouth and Told by an Idiot, a company who celebrate the spontaneity and unpredictability of live performance. In their own words; ‘We take creative risks, we tell universal stories and we include everyone.’ They certainly did that here. Playing fast and loose with true events we are taken aboard the ship and witness the ups and downs of show business, interspersed with flashbacks and flash-forwards to significant moments in the respective careers of Chaplin and Laurel. Chaplin will go on to become an icon of the film industry; Laurel will meet Oliver Hardy and form the greatest comedy duo of all time. But for now the two unknowns must share a cabin across the pond.

Physical comedy is hard to do yet the slapstick here was not overblown. There were gorgeous call-backs to classic skits from the silent era. The timelessness of the humour lies in its innocence; it is simple, ridiculous, self-deprecating fun. The set-ups are well-crafted and perfectly executed; the gags landed raucously to a packed house in HOME’s theatre. The cast (Sara Alexander as pianist and Hannah Chaplin, Nick Haverson as Fred Karno, Oliver Hardy, amongst others, and Jerone Marsh-Reid as Stan Laurel and others) are everywhere, singing and dancing. Most importantly, though, they are acting without talking. The miming is fantastic and very watchable. There is some lovely audience participation as Chaplin dances with a ‘love interest’ from the front row. Amalia Vitale is outstanding as Charlie Chaplin; her incredible physicality and hilarious facial expressions drive the show forward. The accompanying music – an original piano score composed by MOBO award winner and Mercury Award nominee Zoe Rahman – adds both a levity and poignancy where appropriate to proceedings. Ioana Curelea’s set design is imaginative and effective; the ship is continually transformed into different spaces and intertitles are cleverly projected onto a red curtain. This ‘true fantasy’ is effortlessly entertaining and moving; a fitting homage to two greats. Another fine evening at HOME.