Written by Mia Edwards on 16th July 2018. Posted in Reviews 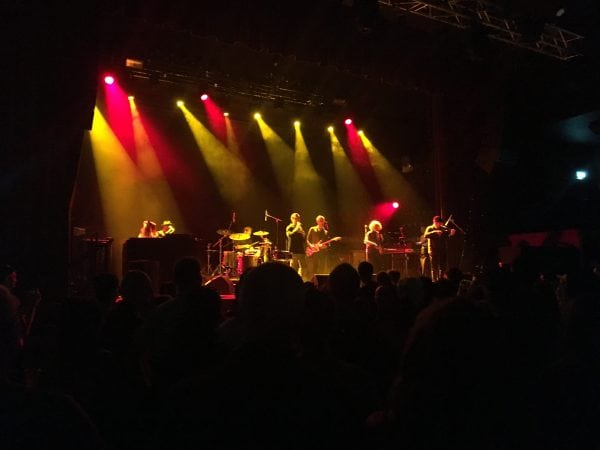 Coming to Manchester for the first time, Rhye graced the audience with music from both their recently released “Blood” album and their 2013 release, “Woman”. Originally a duo, the act is now centred around Michael Milosh, who tonight was supported by a 6-piece band. The first audience interaction came after the first two songs, when Milosh asked, “What is it about Manchester that’s so much better than London? It just feels so much nicer, walking around.” Not a bad way to start a gig.

It soon became clear that Rhye weren’t content to just perform faithful renditions of their songs. Instead, Milosh and his musicians relished the chance to infuse new sounds and rhythms into almost every song on the set list. “Last Dance” was delivered with a fiery, blistering energy, complete with soaring strings and a galloping percussion underbelly. “Hungry in this House” received a hand-clapping up-tempo funk makeover. At every turn, playful syncopations and textured instrumentals made easy work of Rhye’s considerably more laid back album recordings.

These loud, energetic songs were spliced between more mellow offerings. This careful juxtaposition paid dividends when it came to Rhye’s first single, the hauntingly serene “Open”, which was performed in total darkness. With minimal instrumental backing, Milosh brought the crowd from the high of the previous songs to an attentive hush with his steady, soulful opening statement, “I’m a fool for that shake in your thighs”. The fragile vulnerability of that song continued when it was followed, riskily, by a totally new song not yet featured on any recordings.

Milosh was calm and composed throughout, never letting his own performance overpower the music. During the frequent instrumental breaks, he shifted his focus to the percussion set nearby as the musicians around him dug their musical teeth into the earthy, trumpet-infused arrangements. At times, he practically made himself disappear. Less of a boisterous front-man and more of a musical facilitator, Milosh let the music speak for itself.

Unusually, Rhye chose to close the show with a gentle, soothing number. Becoming almost teacher-ly, Milosh conducted the audience in a sing-along of the chorus. Echoing his delicate vocals, no one opted to challenge the tranquil atmosphere he had created. I was reminded of open-air festivals at dusk, of eager-to-please school choirs, and of hazy summer evenings. When Rhye finally downed tools and left the stage, I found myself not wanting an encore. The ending felt bittersweet, like many of their lyrics, and was thus a fitting end to a dazzling set.