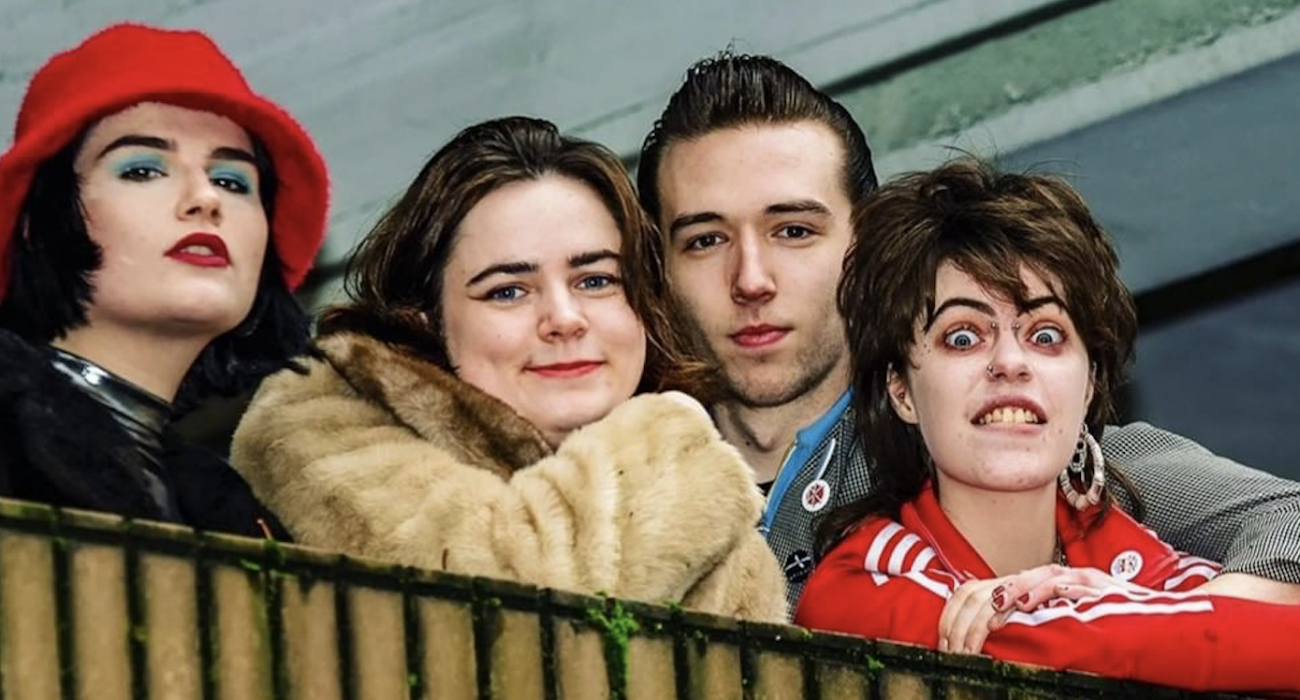 The Band You Can’t Wash Out: Introducing The Red Stains

Written by webeditor on 18th June 2020. Posted in Interviews, Music

The Red Stains have been kicking up a storm on Manchester’s DIY scene, beyond toilet graffiti with their raw, primal take on post-punk, glam, new wave and Riot grrrl. Their feisty and gritty contemporary post-punk consists of Natalie Emslie on vocals, Sterling Kelly on bass, Ella Powell on synths and Ben Dutton on drums. Their debut single ‘Mannequin’, was released in April 2020.

Tilda Gratton chats to Sterling, Ella and Ben for Fuse FM in lockdown:

Sterling: We’ve been together all four of us since last May. It started off with me and Natalie as mates and we were just like ‘you know what, shall we just start a band?’. I met Ella in the Peer Hat and I asked if she played any instruments, and she played synth and guitar so I asked if she wanted to join a band called the Red Stains. Then we only had a name. We had our first gig ever booked but we didn’t have a drummer, so when Ben offered to play for us, although surprised he could play drums, we took up the offer and that was the birth of the Red Stains.

What made you want to start making music and what are your main influences?

Ella: For me, I think the idea of getting everyone’s attention was quite compelling, I liked the idea of having my voice heard, not just people I knew and would meet in the pub would get to know my opinions and know me as a person. Being a bit of a minor celebrity.

Sterling: I’ve always loved music but it was something you don’t always feel encouraged to do when you’re a girl. Finding girls like Ella who also loved making music gave me the confidence that I can do it as well.  It’s all about attention, being loud and gobby. It’s a way of making, especially as a girl, your voice heard in a society that doesn’t always wanna listen to women.

Ben: It’s pretty much the same with me. I’d always go to gigs and stuff but I’d want to be the ones on stage not the ones in the audience, which seemed like a good idea from about 5 or 6, I always wanted to be a musician.

Sterling: We take influences from everywhere, we take some of the ideas of punk and the ideas of riot grrrl but we kinda combine all the sounds and influences from the 1990s. We have such a big variety of influences, I love reggae, Ella likes her dance and electronic stuff. I picked up a bass when I was 16, I just decided I was gonna learn bass and that was it. Older men come up to me and say ‘you’re so tiny you must play a ¾ bass’ but nah its a full-size bass, it’s just a patronising thing that happens. 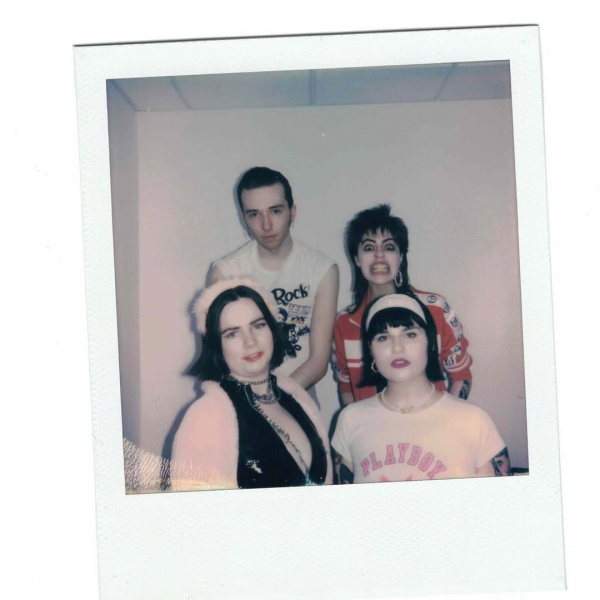 The Red Stains by Nataly Chambers

Love the single ‘Mannequin’, what was the writing and recording process like?

Sterling: Nat had written some lyrics, and we were just reading through some of her lyric books, sitting in the pub together and then I came up with another line, that I thought would work well: ‘I’m a mannequin, just a body’. We got a bass line and Ella did some synth bits for it and we just pieced it together from there. We’ll often write lyrics before the music.

Ben: In practice, we don’t really communicate with our mouths we just communicate through our instruments and bring it together that way by jamming out. ‘Mannequin’ was recorded by our mate Timmy Harrison at Spirit Studios.

Ella: My role in the band is doing all the melody bits so it makes it quite easy because I don’t need to consider whether my melody fits with anyone else’s, I can just do whatever I want, the musical element of the Red Stains is quite straightforward I think, creating it.

Sterling: Often the singing follows the bassline because we’ll put lyrics to a bassline a lot of the time which means the bassline is a rhythm and a melody. We don’t use guitar live, just synths. I think deciding to have no guitar live makes us stand out a bit and suits us more. We don’t feel like we need guitar, it feels whole.

What are your favourite Manchester bands?

All: The Peer Hat, Castle Inn, Gullivers, Eagle in, Night and Day Cafe 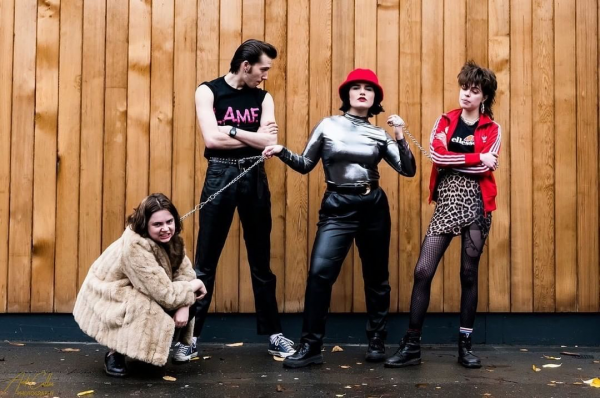 The Red Stains by Andi Callen

What have you been up to in lockdown? Listening to?

Sterling: We’ve started a zine called the Jam Tarts and the first issue is themed ‘Hungover Sundays’. We’ve had some really interesting submissions and they’re all quite different. I’ve started knitting again and found it’s weirdly similar to bass playing, counting stitches instead of beats and using two hands at the same time. I’ve been listening to a lot of Shy Girl and Steel Pulse, calmer stuff, stuff I wouldn’t usually listen to. It’s nice having the opportunity to listen to full playlists and new music, having the time to listen to and find new music rather than just scrolling through and listening to usual playlists.

Ella: I’ve been doing a zoom art club, Sterling’s a good participant, every Wednesday. People tune in on zoom and paint a picture or whatever and talk about it. It’s been really fun and interesting with people from different places and normally wouldn’t have met each other, it means we can all relax and do things from the comfort of our own home. Also, I’ve gotten really good at making crispy seaweed and Chinese feasts, just feasts in general for my housemates. With music, I find I can listen to music that’s more relaxed now, whereas before I sometimes have trouble listening to different genres of music if I was stressed out, but now I’m more relaxed I think I have been listening to more ambient music and things that before I wouldn’t give the time of day to. ‘Electric Counterpoints; by Steve Reich is my current favourite.

What can we expect in the future? Any new music?

Ella: We’d planned to just gig and do festivals this summer such as Kendal Calling, but now that’s not going ahead we’re working on a few scraps but it’s limiting not playing together. We’re excited to play Night and Day Cafe, for our postponed single launch party on 17.10.20.

And to keep up to date: