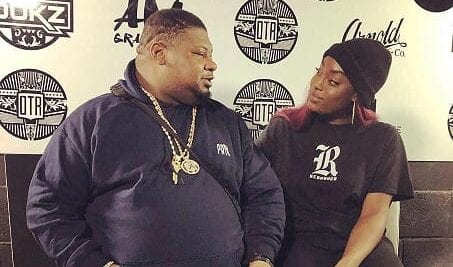 Written by Hannah O'Gorman on 12th February 2019. Posted in Reviews

The OTR Takeover event “marks a significant moment for Sheffield as it begins it’s catch up to
Manchester and Leeds” said founder of Dice Recordings North. I was invited to Cocoon Sheffield
nightclub to speak to Dukz, a rapper local to Sheffield. He is signed to Dice Recordings North and
heads the OTR Movement. He was to be joined by various other artists, many who are also signed to
this registered trademark, as well as Grime MC, Big Narstie!

The night commenced with some UK and US hits played by urban DJ/producer, DJ Regulus. He had
the crowd dancing all night long. Girls would fill the stage one after the other as DJ Regulus smoothly
transitioned to dancehall. It was nice to see so many people enjoying themselves and having a good
time.

Cocoon Sheffield is a luxurious nightclub offering a “unique clubbing environment” and indeed it did.
From the interior to the service, it was spot on. The staff were hospitable and had a smile on their
face the whole time even though we all know bar work is not a piece of cake.

After quenching my thirst with an affordable single rum and coke, I witnessed proud Irish grime MC,
Irish Paddy preparing himself for his performance. The first thing I noticed was the fact that he had
shades on, much like Skepta who proudly wears his sunglasses at night. I then noticed his white t-shirt
which had his EP cover printed in the centre of it. I had not heard of Irish Paddy prior to attending
the event but I was in awe as soon as DJ Regulus played his first track. Produced by Spookzville, Irish
Paddy performed “The Come Up”. He was insanely energetic and set the pace for the following
performers. I immediately opened my Spotify app, searched for his EP, “The Real Irish Paddy” and
downloaded it. His songs represent his views as he talks about history, politics and things that a lot
of youth can relate to so for this reason, I was extremely excited to get backstage and talk to him
and so I make my way to the media room, which was nicely set up with two chairs-one for myself
and the other for him, of course. Waiting nervously, he walks over with his friend who positioned in
between us with a cup in his hand. I shook hands with Irish Paddy and introduced myself and then
we shook hands. It did not feel like an interview at all but rather like talking to a friend. We instantly
had a deep and conscious conversation; he spoke about his inspirations, losses in his life, which
pushed him to work harder and what was even more interesting to me was his confidence. We
discussed grime MCs who have been in the game since before we were born and he said that he
reckons that he could take the title of Grime King if he really wanted to. As somebody who is
addicted to grime and its history, I was extremely impressed by his statement and having assessed
his lyrics and flow, he may stand a chance (I love you, Wiley).

Onto the next performer. I had met up and coming rapper, Milly Millz outside of the venue and had
a brief chat with him about his expectations for the event. I told him, that he looks a lot like famous
American rapper, Meek Mill to which he replied with a cheeky smile, “I know, I get that a lot.” After
our chat, I went back into the venue to join the others in the VIP booth. The host shortly announces
the next performer, “Milly Millz”! I thought that he was a spectator or a fan so when they
announced him and he entered the performance zone, I was pleasantly surprised. I did not know
what to expect so I humbly made room for him and a plethora of his supportive friends as DJ Regulus
played his final track before allowing mysterious Milly Millz to take the stage. He had confidence in
himself and he rapped about the things he experienced and for this reason, I was excited to continue
our prior conversation backstage. He gave me an insight of where he was born and raised and how he wanted to be the one to diminish this negative idea that many people have of “people from the
hood”. Talking with Milly Millz backstage also gave me the opportunity to find out who his musical
inspirations are and to no surprise, he said that it is Meek Mill. It was as though I already knew.

Proud singer/songwriter, PJ Francis is a natural charmer, a gentleman. He “makes music for the
ladies”. He had the girls blushing and adjusting their hair while he was preparing to woo everyone.
Upon interviewing him, he complimented me and I instantly took to him. He had on a smart and
stylish suit and he looked as though he was going on an expensive date. When I spoke to him
after his performance, that’s how it felt, like I’d been on a blind date. I found out a lot about him. Like every
artist, he aspires to become bigger and better but what I found interesting about him is the fact that
he makes ladies feel “better about themselves” and more confident through his music. His origin is
what inspires his style. He is of Sierra Leonean decent and refers to himself as “PJ aka Salone
Borbor” which translates as Sierra Leonean boy. This cheeky nickname is reflected in his
Afro/dancehall style which did not fail to make everyone, the women especially, feel special.

When I got word that well-known UK Grime MC and founder of Base Defence League (BDL), Big
Narstie, was supporting Dukz at the OTR Takeover event, I did not hesitate to grab the opportunity of
meeting him. I have been a fan and have listened to his music since the days of Channel U, which
allowed the careers of artists such as N-Dubz, Tinchy Stryder, Dizzee Rascal and Giggs to elevate. Big
Narstie performed some songs from his latest album, “BDL Bipolar” including one of my personal
favourites, “5AM” featuring Moelogo. His presence and energy on stage were undoubtedly
unmatched. He controlled the crowd as if they were under hypnosis and he had a herd of supporters
including Dukz himself, Deep Green, Irish Paddy, Milly Millz and PJ Francis, cheering and singing
along in unison behind him. After dancing and singing along to some of his amazing tracks, his
performance was sadly over. However, it was time for me to join him backstage and ask him some
questions. 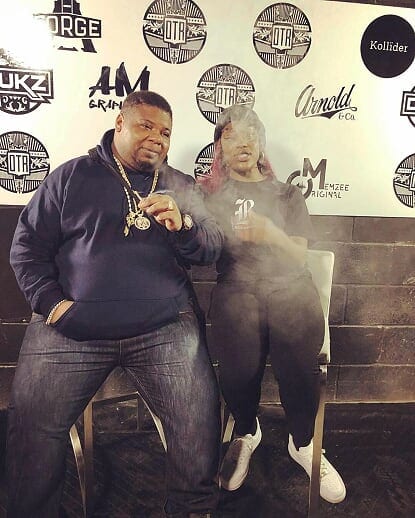 I was nervous to meet Big Narstie but the strong fumes of the mary jane that he was inhaling, entered my system and made me rather relaxed and so for that, I must thank him. I had written a number of accents onto tiny pieces of paper, which I made him pick out of my palm. I then asked him questions-questions that one may ask on a first date such as “do you expect to have sex after the first date?” He picked out the Australian accent and went ahead to answer the question. He said that it is not an expectation but he would not mind if he received “nookie” after the first date. Big Narstie, holding his joint and looking in my direction with his eyes as red as a ripe red pepper said, “if you want to have sex on the first date then do it. You shouldn’t care what anybody says about you” and that is a piece of advice that I will forever cherish.

Finally, it was time for the man himself to perform-Dukz! A few months prior to the event, I had watched his “24 hours with Dukz” video on YouTube which gave viewers “an inside look into the lead
up to a sold out O2 Academy show with M Huncho”. I familiarised myself with his songs and musical
history so I knew what to expect but I was fooled because seeing him perform in person was even
more exciting than merely watching videos on YouTube. He too had an energy that was unmatched
and I was proud as if I was part of his family. His younger brother, who also appeared in the 24 hours
with Dukz video, was present and supported his big brother as he performed for his fans. Although I
thought that I had familiarised myself with him, I soon came to the realisation that there is so much
more for me to find out from him so we took it backstage after a fantastic set to get my
many questions answered. OTR stands for “Only the Real” and Dukz reinforced the fact that it is a
movement for people who are honest and interested in the city’s property and business
development. Dukz isn’t just an artist. He showed me that he has dreams and aspirations like a
lot of us. He always mentioned his “brother” R1, with whom he used to make many songs with. They
were, in fact, a duo but there came a time when they both decided, that it would be best for them to continue their journey separately. However, they continue to be brothers as they always were. Dukz
hopes that the OTR movement only grows and reaches every crevice of the UK. I have no doubt that it will.