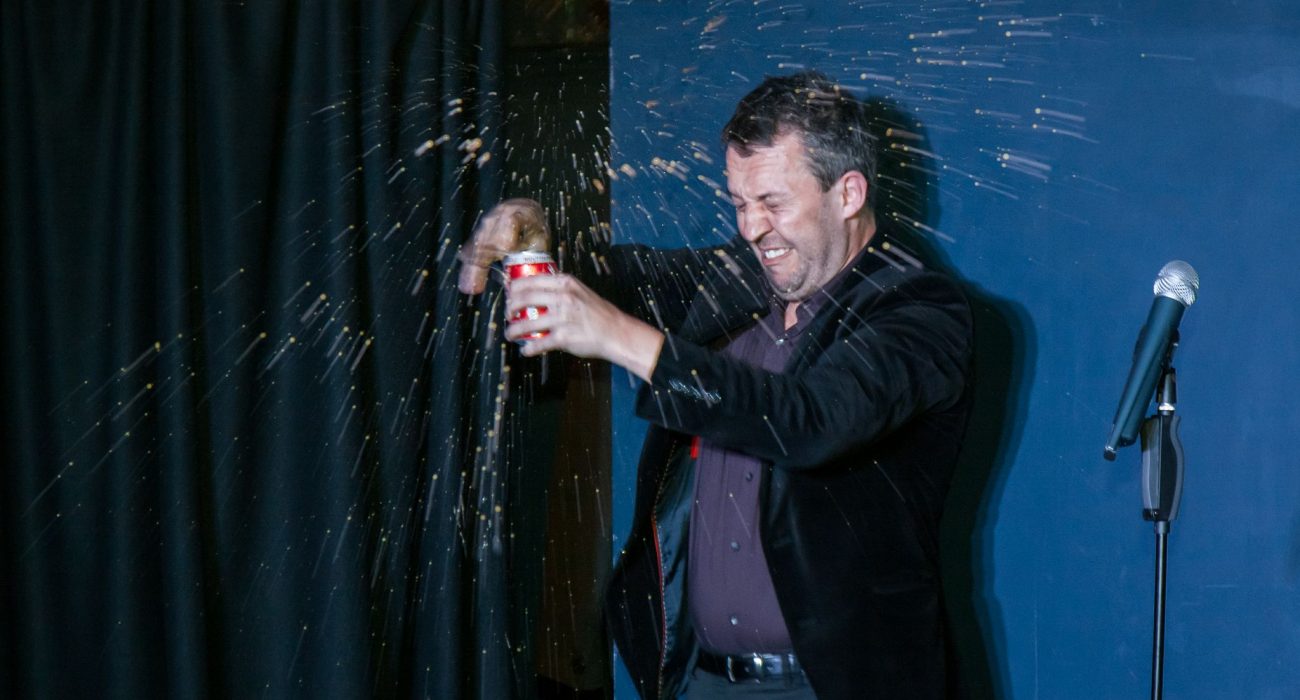 Written by webeditor on 24th March 2020. Posted in Comedy, Reviews

On Sunday evening the university’s Comedy Society presented Shamrock ‘n’ Roll, a show of ‘sensational sketches, stupendous stand-up and drunk-prov’ to celebrate St. Patrick’s Day. Our MC and humble guide for the night was Josh Towler, who navigated proceedings deftly and supplied the musical numbers. PhD student Chris Waugh kicked things off, drawing on his academic and romantic interest in sex to make some smart and amusing observations on the perils of dating in the 21st century. Next, the Manchester Review (Noah Matthews, Jack Holding, Leah Fennell, Sadie Rose, Keanan Hinchcliffe, Hannah Mcewen, Dick Johnson) delivered their sketches which ranged from political satire to toilet humour and offered a brilliant snapshot of contemporary society. A stand-out was a well-crafted scene involving a cleaner who stumbles across a stall of body-altering potions; it was a great piece of physical comedy, neatly executed and culminating in some very funny tango dancing.

The second half consisted of two more stand-up sets; Shresht Jain coolly broke down the cultural differences between India and the UK with anecdotes from his school days. Another highlight came from Vasco Zeferina who really controlled the audience with his deadpan delivery. He used silence well, not afraid to embrace any awkwardness or prolong any pauses. His highly engaging approach was at once surrealist and minimalist.

The show closed with the Drunk-prov competition, a series of games whereby the losers each round take the ‘shot of shame’ and the competitors (consisting of Steph Norris, Kamen Cooley-Greene, Hal Winston-Fletcher, Jake Ruding, Oonagh Johnson, Paul Alex Treadaway, Ben Morris, Charlie Wong) become increasingly intoxicated, with mixed results. Audience suggestions allowed for several fantastical scenarios, including spontaneously combusting party-goers and an array of outlandish accents. Steph Norris’ blue team came out on top and took home the coveted Comedy Crown. My only reservation here would be that the combination of games and alcohol can become a bit messy or over-the-top, and the danger is that the performers are having more fun than the audience. Ultimately, though, the improvisation was impressive and the packed house were genuinely tickled. Haus provided a lovely setting for the evening’s entertainment and it was the perfect way to round off a weekend. Check out the University of Manchester Comedy Society facebook page for future events.