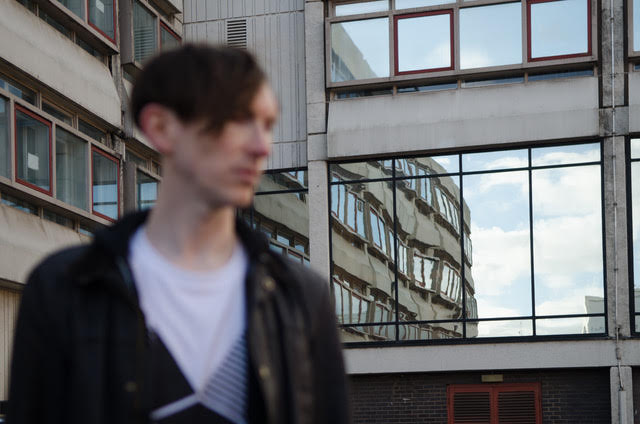 Written by Hannah O'Gorman on 22nd March 2018. Posted in Reviews

When Fuse Met… TVAM. TVAM is a solo project made up of Joe Oxley along with his guitar and bulky TV screen. Psych-rock loops and echoey vocals pair with heavily distorted VCR images and lyrics on the TV to create an immersive and hypnotic experience. I caught up with Joe before his performance at Band On The Wall’s “Free Vibes” to talk music, nostalgia, and subliminal messaging.

HO: Starting off with the basics, how would you describe your music to someone who has never listened to it before?

TVAM: I always find that a bit tough to answer. When I started off it was much more about being sort of Oh Sees-ish but I’ve always been interested in electronic music and using synthesizers so for me it’s shifted. Now it’s a bit more like Suicide. A bit more like My Bloody Valentine. Those are probably the nearest references at the moment.

So you’ve been performing as TVAM since around 2014?

How do you think this project differs to projects you’ve been involved with before? Do you think you’ve changed much as a musician?

Well this is the first solo project that I’ve done. Before it I played in countless different bands. The main kind of thing was 60s garage and surf music or more the surf revival. I was really interested in a band called Man or Astro-Man? which is like classic surf music if you mixed it with Devo. It’s very different being in band to then doing something on your own, certainly on stage because you’re not there with your mates. Performance becomes a very different process. I think that a band naturally progresses together and you have different characters that are leading it whereas in a solo project it’s all me. To be fair though I think it gave me the chance to do it exactly how I wanted to with the visuals and everything.

Nice to have full control!

Yeah, I can really just gorge on everything I love!

How did you first get into playing music?

I’ve been playing for quite a while now. I think it’s the same reason that many do. Friends around you start getting into music and playing instruments so you pick something up and it’s fun. From that you start to be able to use it as a tool to express the stuff that’s in your head. Influences change along the way but the really important thing is that ability to put something that was just in your head out into the world.

With lyrics in particular, where would you say those influences come from?

If I’m honest, I quite like advertising. I like the way it wants to speak to your subconscious and create a lasting image or a particular coupling of words that sticks. As a performer using both music and visual aspects, there are times when I will use lyrics up on the screen or even lyrics on the screen that go unsung, adding to that subconscious edge.

That subliminal messaging is so effective! After seeing you play “Total Immersion” for the first time with the lyrics only on the screen, I can’t listen to the song without hearing words that aren’t there.

It’s funny, you’re not the only one that’s said that! I think it’s really cool that it has worked out like that because that’s kind of how it happened to me. I was writing the song and I could hear those words but didn’t want to sing them because the track felt like an instrumental.

How did you get into tape editing to be able to create that visual aspect of the performance?

Well I actually use a combination of analogue and digital sources. I’ll tend to use analogue for effects and mixing and then edit it and put it together digitally but in terms of working strictly with VHS, that became an interest because I wanted to challenge myself. It also just coupled so well with the music that I was making and am still making. With VHS you don’t get high definition, it just feels as it was. I think it’s quite novel to be able to take things that I knew as a child and use elements of those for something I’m putting out now at this age.

It seems there’s an element of nostalgia in your work.

Nostalgia does form a big part of it. I am of two minds about it though. You can see in conversations with your friends, collectively we have an enjoyment of nostalgia but how much of it is just pining for memories and your childhood? So there are two sides. It can be regressive in some ways but if you harness it in the right way you can make something new. I do think it’s really interesting since it’s such a personal thing. Two people can have very different experiences of the same reference and so one person’s nostalgia may be very different to another’s.

Do you think there’s added value in continuing to release music in formats that may be considered nostalgic like vinyl and tape?

As an artist, it’s something special to be able to create a physical artefact and be able to see a physical manifestation of your work. Digital is fantastic for the speed at which you can get something out there but I think there is something more to be able to pick something up and say that’s something I’ve created. Likewise I think there’s value in the records and tapes that I buy from the bands that I like. I probably come across way more music online and on streaming platforms but when I find something that I really like I want to have the record in my collection.

Last question now! Who are your current favourites in your collection to listen to?

Soft Moon’s most recent album is pretty cool! I really change around a lot. One artist that I listened to recently that I really liked was Zombie Zombie which is dance-y electronic with some really interesting production and they got this French comic artist called Druillet to do the album art which was really cool since I’m a big fan of his stuff.

You can find a review of TVAM’s show at Free Vibes here: https://fusefm.co.uk/blog/2018/03/04/live-review-free-vibes-x-amazing-radio-at-band-on-the-wall/