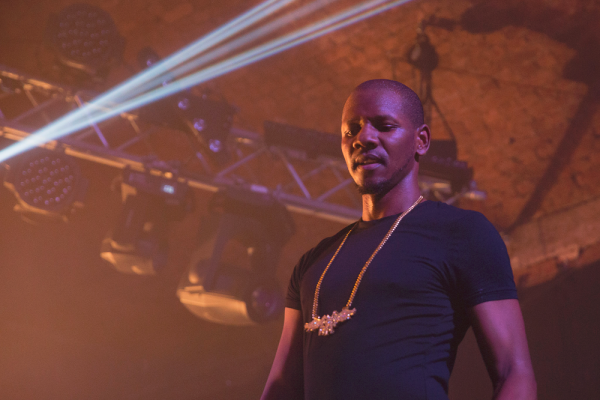 Arriving at Warehouse Project on Friday night I was greeted with
one of the biggest crowds I’d ever seen at the venue, all queuing
up in anticipation for a night full of grime, hip-hop, and the main
man himself – Giggs.

Warehouse Project events are always a masterclass in consistency, whole nights curated to
certain genres (or even sub-genres), with heavyweight names from start to finish. And this
night was no different. On entry we were greeted with beats being played from Manchester’s
own Jonny Dub, playing a range of UK grime and old-school soul tunes. Moving over to room
two you could find his Levelz counterparts, Chimpo and Chunky, spinning some of
Manchester’s finest contributions to the grime scene with Chunky getting the crowd hyped
with his constant MCing.

As the night wore on, big names from further afield started to play. Up-and-coming MC Nadia
Rose played a blistering set in room 1, with hit ‘Skwod’ got everyone rapping along. Before
the Landlord himself graced the stage, 1Xtra hype-man Charlie Sloth brought some fire out of
the booth, but into Store Street. His interactions with the crowd were as funny in real life as
they are on his show, the highlight being when he got the whole room shouting the lyrics to
Big Shaq’s ‘Mans Not Hot’.

And as the night wore on, the clock slowly ticked ever so closer to 3am, the final slot of the
night, when Giggs was set to play. And it seemed that the crowd from before, after dispersing
during the course of the night, all met up once more to see him perform. Even though Giggs’
new album Wamp 2 Dem didn’t really impress me, with many songs falling flat (*cough*
track 8 *cough*), he still put on a hell of a show. In his short half hour set he blasted through
his classic tracks like ‘Whippin Excursion’ and ‘Talkin’ the hardest’, and also features such as
JMEs ‘Man Don’t Care’ and Drakes ‘KMT’. And although the 6 God himself didn’t show up,
after his surprise appearance during Giggs’ set at Reading Festival got me excited for him to
appear in Manchester, it was still a set worthy of Warehouse Project headliner.