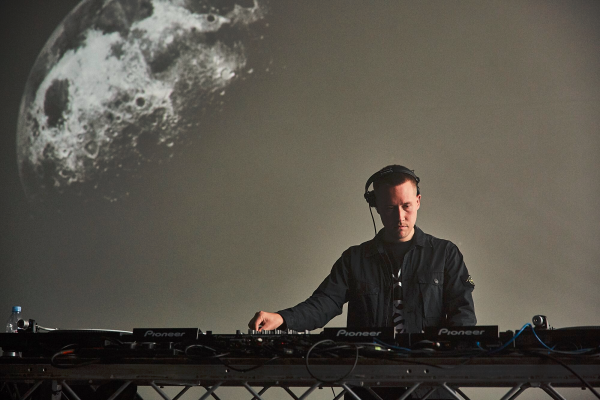 Throughout the yearly Warehouse Project season, there are always a
handful of one-off shows not hosted in the usual haunts of Store Street,
but shows that utilise the variety of different venues that Manchester
has to offer. This year is no exception, and last week they hosted a
Stone Island-sponsored party in Old Granada Studios – an old ITV studio
where Jeremy Kyle and Take Me Out have previously been filmed.

The venue didn’t seem akin to cheesy TV shows on the night though, as it had been
transformed by intense strobe lights and range of different projections through the large open
spaces. Stone Island logos were emblazoned on the brick walls and gaunt male models looked
moody on a projection at the back of the stage behind the long table reserved for the DJs of
the evening. My personal favourite was the four models walking on the spot in a Stone Island
spacesuit in front of a full moon – fairly disconcerting with the repetitive beats that were
playing over the top.

The line-up for the evening was a solid wall of techno from start to finish: with UK
heavyweight Joy Orbison opening up the preceding’s, followed by old school veteran Kirk
Degiorgio, with the critically revered Detroit selector Omar S wrapping things up at the end.
Joy Orbison provided a genre spanning set that he is known for, favouring melodic house
towards the end which was in contrast to Kirk’s preferred heavier, industrial techno sounds.

For me, though, the highlight of the event was hearing Omar S bring the sounds of the States
over to Manchester. Detroit was one of the original cities to start producing, and appreciating,
electronic techno and house, and Omar had the air of a master of his work. His set was a lowkey
affair, with nothing being too over the top or in your face, but it was the simple grooves
and melodies that ran through his choices that kept the crowd all dancing ‘til the early hours.