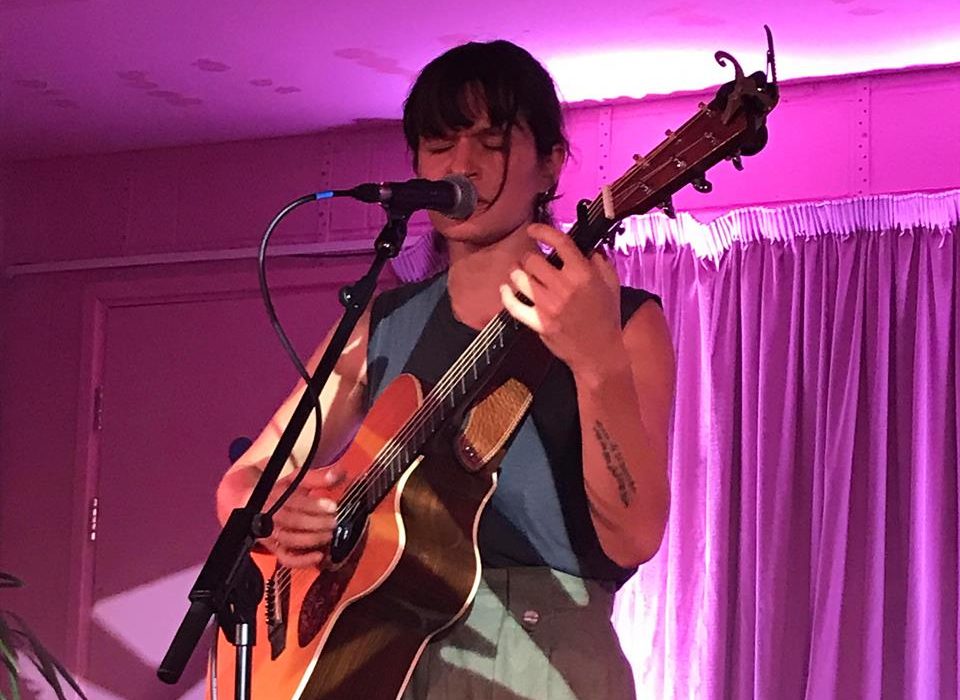 Written by Jacob Thompson on 22nd January 2019. Posted in Reviews

Now Wave’s YES is fast becoming a firm favourite of Manchester’s music goers, and with good reason. Their roster of touring artists is consistently impressive, YES’ basement and Pink Room are both lend themselves well to electronic and instrumental-led acts respectively, and at £2.95 a pint I have nothing but good things to say about the venue’s bar setup. The Pink Room’s small size and mid-range capacity makes for a reliable up-close and personal gig experience, its marshmallow walls pressing the crowd face-to-face with the artists. Last month Fuse had the pleasure of enjoying Snail Mail’s somewhat hard-fought performance there (Lead singer Lindsey Jordan’s voice had begun to suffer during her long UK tour), and this week we were only happy to return for an act beloved by many in our esteemed upper echelons; Adrianne Lenker of Big Thief fame.

Lenker is no stranger to Manchester from her tours with bandmates Buck Meek, Max Oleartchik and James Krivchenia, but this was her first time taking on the city alone. Though most well-known through Big Thief, Adrianne has an impressive backlog of solo albums, dating back to 2014’s Hours Were the Birds, a youthful, soft-tempered bildungsroman of earnest vocals and upbeat pace. Next came a-sides/b-sides, written and recorded over two days in New York with bandmate Meek on guitar. For her January YES gig, however, Lenker was firmly focussed on her newest offering, 2018’s abysskiss, a brooding, rain-soaked hearth of an album with a few powerful tracks and a smattering of experimental embers attached.

Lenker, it would seem, can tell where the strength of the album lies and where it sags. After a brief struggle with a guitar lead and a quiet hello to the already-enamoured crowd, Lenker went straight into the stronger tracks of abysskiss, rattling off Symbol with percussive bombast, before sinking through the meat of Womb, From and Terminal, all lyrically interesting and well-worked songs in their own right. Terminal especially enraptured the audience, its spellbinding refrains lifting the room each time Lenker swooped into them. abysskiss doesn’t lend itself to crowd participation, instead it is anthemic in a quiet sense, and Lenker’s performance lulled the crowd into an intense emotional stream, punctuated only by brief words of thanks. A grateful performer, but not a talkative one, her presence felt ethereal and fleeting. 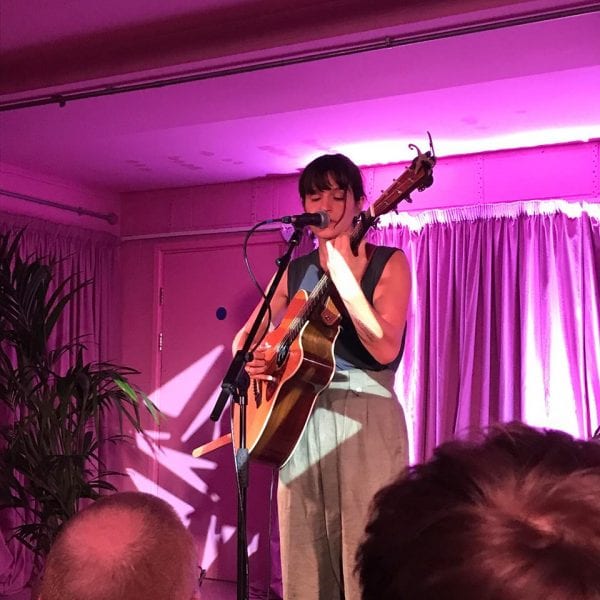 One wonders whether she is conscious in keeping a distance from the audience, an air of otherness that allows her to reveal her vulnerabilities in song rather than in conversation, bleeding them for all of their emotional content rather than giving them context. Still Lenker’s reticence was equalled only by the admiration she was met with, a few bold onlookers braving a shout to her between in moments of quiet between songs, all in praise, of course, and gratefully accepted. Playing on her 13-year-old acoustic guitar, missing a front tooth and with one rogue lock of hair caught in her mouth, Lenker seems either wonderfully real or an expert at curating an amicable image. Regardless, her music is phenomenal, and her performance was pitch-perfect. With a voice more beloved for its fragile straining than for its power (though there’s plenty there), Lenker never sounded like a live-album. Each song felt like it was being performed for the first time, and some of them were.

After pulling out some old favourites, Kerina, Hours Were the Birds and Big Thief’s Lorraine, she quietly debuted some brand new material. The experimental sensibilities of abysskiss already seem to have provided some growth to Lenker’s ever-dynamic songwriting, and her new efforts ring somewhat stronger than her most recent release. The (working title) Pizzeria Gusto certainly inspired confidence for a future album, more nuanced than Hours Were the Birds early tracks but less overtly melodramatic than a-sides/b-sides safer pieces, and altogether more listenable than some of abysskiss’ misfires. Out of your mind is one such misfire, but Lenker gave it a hero’s burial at YES, receiving hoots of applause for managing to break its high notes perfectly despite an up-pitched start.

Though her interaction with the audience was limited, sometimes to the point that it felt like I was simply waiting for the next song to begin rather than for any kind of artist-audience connection, Lenker remains an inspiring figure and a masterful storyteller. Her performance was less like a modern solo artist and more like an old session player, setting herself down, weaving her warm-hearted stories and eventually leaving with a grateful smile and a “thanks y’all”. I was left wanting more, and wishing I could have a chat with her and pick her brains to see how much of her reticence was real and how much was just for show.

The former of my wishes, thankfully, has an optimistic trajectory, promised by the gripping new track that Lenker dropped for her second encore piece, untitled for now. As for the latter, Big Thief are returning in May for their 2019 European Tour, and this time there’s no PR manager that can stand in my way when it comes to securing an interview.

Watch out Lenker. Fuse is coming for you.