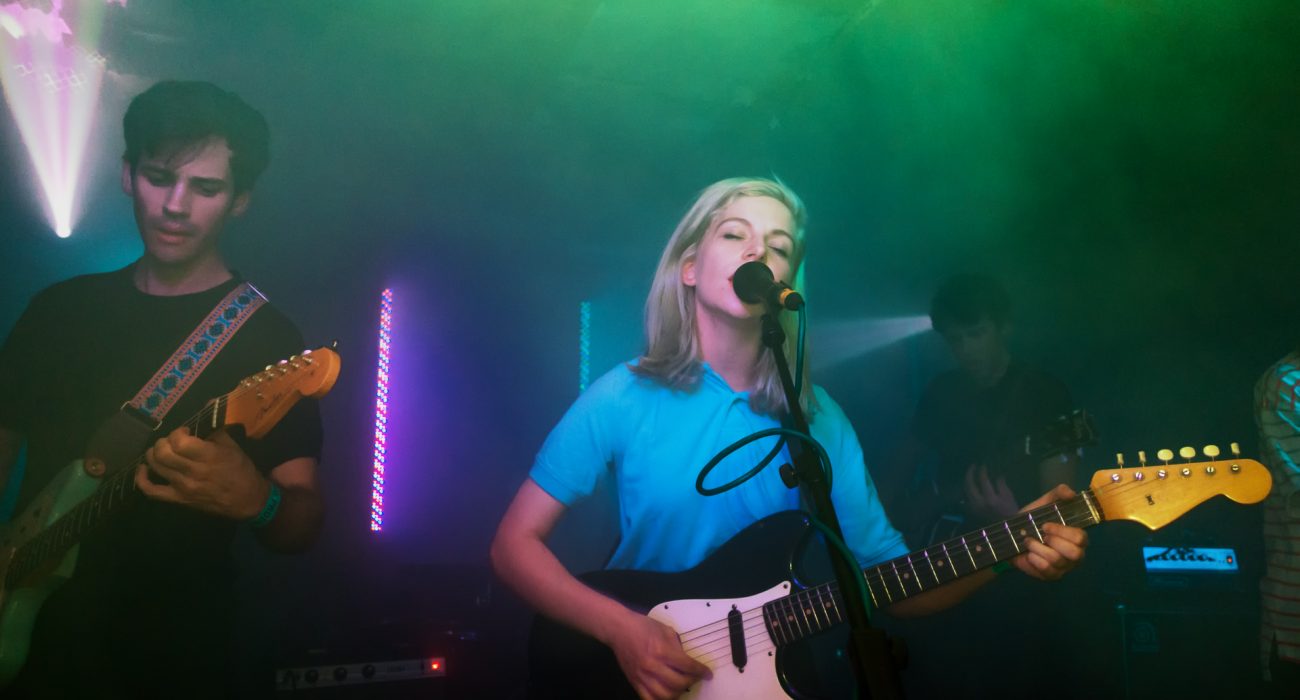 Written by Hannah O'Gorman on 26th February 2018. Posted in Reviews

Since forming in 2011, Alvvays (pronounced always) have crafted a jangly, dream-pop aesthetic
brimming with Greta Gerwig-esque charm which last year garnered critical acclaim on their sophomore
LP ‘Antisocialites’. Antisocialites marked a clear improvement from their self-titled debut in terms of
song writing and production value, with front woman Molly Rankin delivering a stunning performance
throughout.

As I arrived the support band ‘Spinning Coin’ were already underway. Spinning Coin offered a stark
contrast in voices between the 2 main vocalists on stage, with the abrasive vocals of Jack Mellin cutting
across the more delicate tones of Sean Armstrong. This partnership offered an interesting dynamic to
the Glaswegian outfit’s sound and I enjoyed the energy they brought to their set.

The headliners approached the stage to a swarm of pastel coloured patterns and static projected upon
them before playing the opening track of their latest album ‘In Undertow’. The crowd responded with
warm cheers as Kerri MacLellan’s arpeggiated synth draws the song to a close and Rankin remarked with
a smile, “Do you know what I like about Manchester? It doesn’t matter if it’s a Monday night”. Alvvays
continue to pull out hits, with “Plimsol Punks” and “Archie, Marry Me” following shortly after. One
striking difference between watching the band live and listening to their records is how much more
prominent Rankin’s vocals are. Almost as a trope of the genre her angelic voice merges with the
shimmering instrumentation on their records, but live she truly was the focal point of the music. This
was never more the case than half way through their set when the lights dimmed, and a spot light shone
upon her for ‘Forget About Life’. The crowd sang every lyric back to Rankin as the thudding toms from
Sheridan Riley started to deliver a pulsating rhythm building in a small crescendo. After a brief exodus
from the stage for one of the most predictable and redundant encores I have ever witnessed, the band
re-emerged to play ‘Party Police’. Throughout the show it was endearing how enamoured the band
were with the sincere response they received from the crowd.

After watching Alvvays live, I must admit I am now a bigger fan. They have a charm and brilliance which
you can’t fully appreciate from their exploits on record. If you are a fan, make sure you make effort to
catch them live as it does breathe new life into their music.