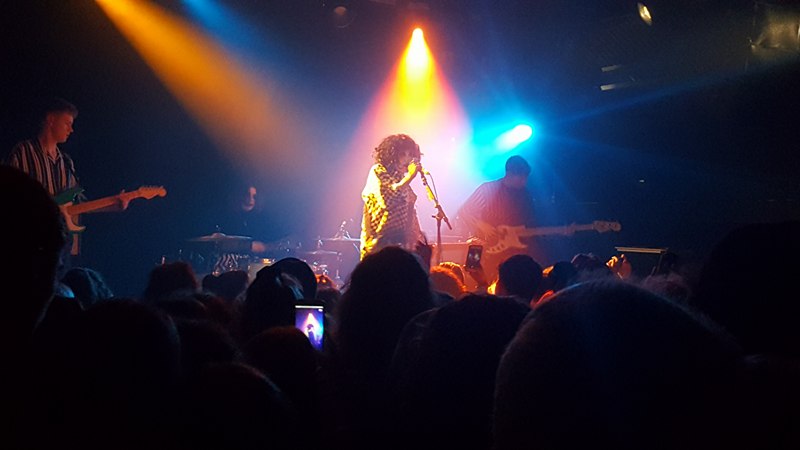 Written by Hannah O'Gorman on 13th March 2018. Posted in Reviews

Placed 5th on BBC’s Sound of 2018, Pale Waves have gone from strength to strength and their sold
out gig at Manchester’s Gorilla proved why they have been described as ‘the goth pop hybrid you
didn’t know you needed.’

As I arrived, Our Girl was just about to begin and I was thoroughly impressed by their set. While a
much darker sound than Pale Waves, Our Girl is an enigmatic three piece band that is set to go far.
The lead singer Soph Nathan was engaging and her vocals had an almost relaxing quality to them. I
was especially impressed by the drummer, Lauren Wilson whose passion and energy made me very
drawn to watching her perform. I really enjoyed their set and have already downloaded several of
their songs!

And then came the main event. The headliners entered to a cool, retro guitar riff which was
accompanied by many cheers from an excited crowd. Opening with one of their biggest hits
‘Television Romance,’ Pale Waves instantly captured the audience excitement with their
performance. Lead singer Heather Baron- Gracie eccentric look perfectly captured the vibe of their
80’s inspired music as her Robert Smith inspired gothic look was complimented with her equally
eccentric moves that accompanied many of the lyrics. While the set only lasted 45 minutes, it was
packed with all the songs from their debut EP ‘All the things I’ve never said,’ while also including
some new songs. Ending on a high with their single ‘There’s a Honey’ that had the audience singing
back pretty much all the lyrics, it proves how much of an impact this band has already had on the
alternative music scene. They were a brilliant, high energy band who are going to become huge in
the next couple of years and they deserve all the recognition and success they have been given.