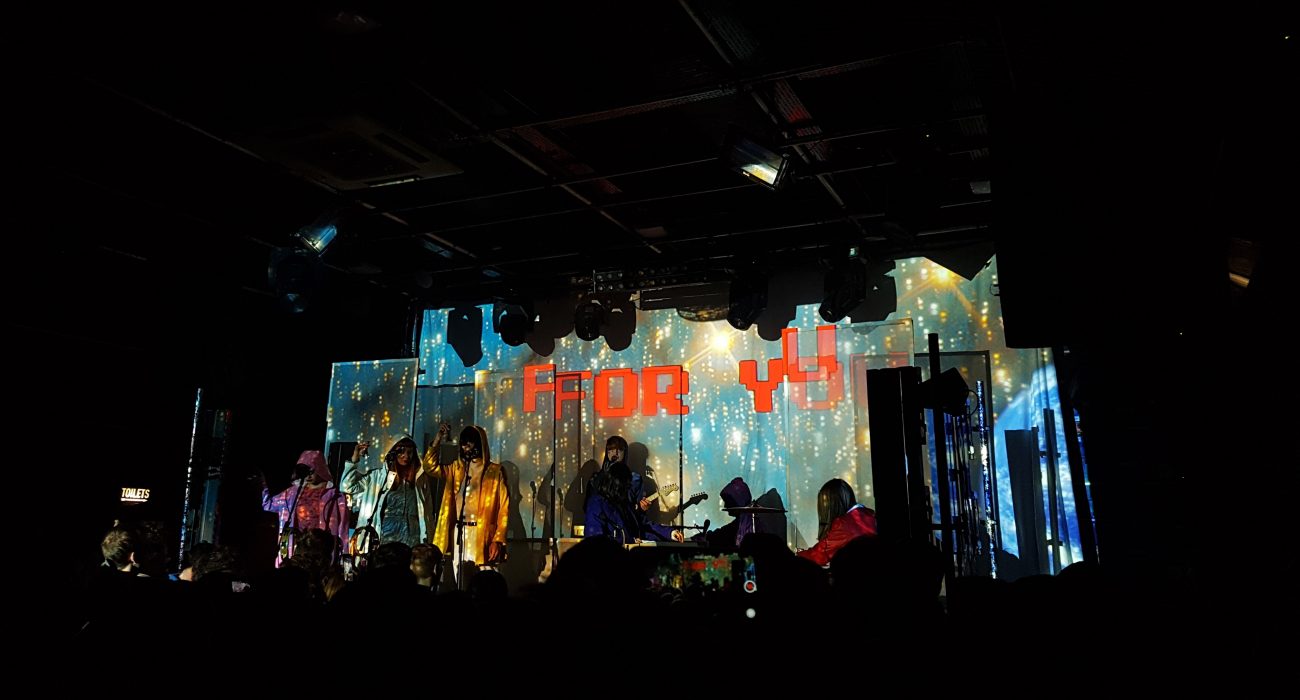 Written by Hannah O'Gorman on 9th March 2018. Posted in Reviews

Superorganism have exploded on the scene and true to their name, have evolved a sound far more experimental and technical than most other artists. True to form, their live show follows the same ambition, sound, and audacity seen in their debut album.

Upon arrival at Gorilla, I was greeted by a real mix bag of gig-goers. There was a healthy dose of students, a few Brewdog-sipping, earplug-wearing 6Music dads at the back, and some younger teens with chaperone dads at one of their first gigs. This mismatch of people really helped generate a relaxed atmosphere, which suited both Superorganism and the support act, Pi Ja Ma.

Pi Ja Ma is a French act specialising in upbeat alt-pop songs, but it must be said that at Gorilla they performed to their absolute limit. Singer Pauline de Tarragon’s vocals pierced through the room, grabbing everyone’s attention, even the Brewdog-sipping dads. Even between songs there was no reason to head to the bar. The back-and-forth between de Tarragon and the guitarist was witty, engaging, and nicely warmed up the crowd before the entrance of the headliners, Superorganism.

Superorganism arrived to a cacophony of noise, strobe lights, and excitement. First up was “It’s All Good”, which then bounced straight into “Nobody Cares”, keeping the rhythm going. Through the whole set the backing vocals of B, Ruby, and Soul kept the rhythm going, and the dancing nicely complemented the feel of the gig.

A special mention must go to lead vocalist OJ, who was struggling through the night with a severe sore throat. Telling the audience that she was in tears during her soundcheck for the BBC earlier in the day, she powered through the gig (with a side-order of tea as a boost) with an impressive performance, sounding as engaging as the debut album does recorded.

The only negative of the show was the length: for a band with one album of only ten songs and 32 minutes in length, I expected a full play-through of the record. However, the band only performed nine songs, missing Relax (a personal favourite). This did mean their whole performance was just over 45 minutes, and for a £12 entry fee, some fans may have felt short-changed. This obviously will change as the band release more records, but some nevertheless may feel something was missing.

Overall, Pi Ja Ma and Superorganism served up an eclectic mix of new sounds, art-pop, and a stunning light show that will live long in my memory. Superorganism are pushing the boundaries of pop music, and their live shows reflect that.